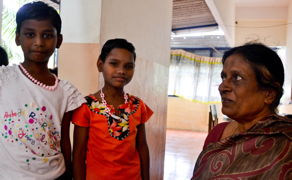 My first meeting with Mrs. Susheila Williams was at a reception that was part of a higher education conference we were both attending in Atlanta. Perhaps the scene is somewhat exaggerated in my memory, but in the dim reception lighting, Mrs. Williams appeared tiny and meek, though not afraid, wrapped in her traditional Indian sari and standing calmly in the midst of what I recall to be very tall American college administrators.

As I leaned in to hear her over the background buzz of a multitude of conversations, first impressions suggested Mrs. Williams to be an interesting, knowledgeable person, someone I hoped for a longer conversation with than reception small talk would allow. An opportunity for lengthy conversation never materialized that week, but I did sit in on an interview with Mrs. Williams during the conference, and her answers revealed the strength of character, passion for education, calmness, and leadership that small talk had hinted at. It took traveling to India this summer to get the longer conversation I had hoped for. Seeing Mrs. Williams in action in her everyday context also helped me better understand how gifted she is for the work she does.

Her present work officially began when she was appointed by the Church of South India to assist with the 1995 founding of CSI Bishop Appasamy College of Arts & Science in Coimbatore. Mrs. Williams serves as the college’s executive secretary, which in India refers to a college’s chief administrative leader, a role something like that of a college president in the United States.

Her path to academic leadership was never a given, and she almost didn’t attend college at all. Describing the gender barrier to higher education that BACAS, a co-ed institution, works to overcome, Mrs. Williams has noted that Indian women are not encouraged to pursue education beyond a certain level. Parents fear they will have trouble finding a bridegroom who is more educated than their daughter if they let her continue her education. “It’s kind of a difficult position for the parents,” she explained and added that this scenario played out in her own life.

When she scored in the top of her class taking an all-important completion exam at the end of secondary school, she wanted to pursue further studies. However, her parents were not supportive. So she sat in their house and refused to eat for three days. The Christian missionary who had established a school in young Susheila’s town came to visit Susheila’s parents and asked why her best student was not attending college. Upon hearing about Susheila’s difficult position, the missionary filled out the college application and made Susheila’s father sign it. And that’s how Susheila entered college. As Mrs. Williams said, “But for [the missionary’s] intervention you wouldn’t see this present Susheila.”

After earning her bachelor’s degree in economics, Mrs. Williams did marry, and for the next 20 years she worked as a housewife and raised two sons. When she was 40, her sons became students at professional colleges and Mrs. Williams returned to school. She studied for 10 years, earning a master’s degree in English literature, a diploma in office organization and procedures, a post-graduate diploma in interior design, and a one-year course certification in the teaching of English. Today, aged 75 and a widow, in addition to leading BACAS, “this present Susheila” is completing her PhD with a project focusing on the social and economic impact of empowerment of marginalized women, drawing from her study of sex workers and women under legal trial at the Central Prison in Coimbatore.

Prior to taking on the role of executive secretary at BACAS, Mrs. Williams served as principal of the Church of South India’s Women’s Industrial Training Institute. She has also worked as an interior designer, with clients that include major banks in Coimbatore, and is an internationally-known artist whose work highlights the causes of women. Her oil painting “The Samaritan Women” adorns the Pope’s official residence at The Vatican. 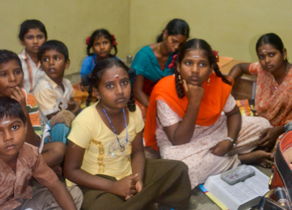 “Educating women gives them a kind of upward mobility and self-confidence,” Mrs. Williams noted as we chatted in her office just before I departed the college in August. When I asked about returning to school later in life, she said, “I always feel that women must understand other women. We change roads [or seasons], but you remain as a woman…. I am a woman. I have got everything God has given. When you don’t have an understanding of your own self, you find that you find fault with others.”

My week at BACAS was filled with meetings with students and faculty and with visits alongside Mrs. Williams to many of the college’s community outreach sites, including the Central Prison, a children’s home, a tutoring center for slum children in danger of dropping out of school, and a street play by social work students describing the dangers of alcoholism. Following our visit to the dropout center, in particular, Mrs. Williams commented numerous times about how good it was to see the progress in that community.

The impact of that visit on her was further clarified when I asked what she enjoyed most about her role at BACAS. “The last two days I have been very happy when I saw the fruit of our labor: the drop-out children, the transformation of their lives and of the slum, and the street play yesterday, the immediate response. What the students said came from their heart; that means we have really sensitized our students. [These things] gave me great happiness, as if I have achieved something God has asked me to do.”

I don’t know Mrs. Williams’ exact role in directing or creating the social projects I visited, but there’s a clear sense that her involvement goes deeper than just rubber-stamping projects others initiate. Every indication is that she is a skilled leader who empowers her faculty and students, yet her imprint is present in all of these projects, as it is in the school she helped found. She was a welcomed, honored and known guest among the people being served by the outreach and service efforts I visited with her.

It seemed every time I turned around in Coimbatore some snippet of conversation with Mrs. Williams or with those who work with her revealed another of Mrs. Williams’ un-trumpeted accomplishments. The portrait that emerged is of a woman of calm strength, confidence, persistence, and shrewdness. She seems committed to using her talents to respond as fully as possible to the world’s needs and seems little interested in focusing on building an impressive CV or engaging in power plays. 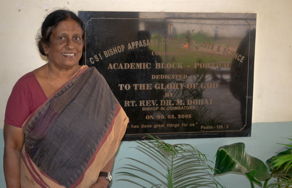 Mrs. Williams noted that women in India move in a type of confined circle. “We don’t go out of that circle or enlarge our horizon,” she said. “In the West, women aren’t confined in that way.” She noted, for example, that you see women in the West reading books, and she does not see that so much in India. She said Indian women may achieve something but then they stop, whereas Western women keep doing new things. “We must not think, ‘I have done this and confined myself to this circle.’ Come out to the community, and ask what else can you do.”

Change is coming in India, but it is not yet enough, she noted. “There are some outstanding women — for example, social workers — coming out of their shells and doing extraordinary things, but they can be counted. There are too few of them.”

Mrs. Williams’ personal convictions have marked how the college operates. “God said whatever you have, you share with others, which is why in this college we share everything,” she said, explaining that a small act of kindness gives a sense of dignity to people. These are words Mrs. Williams lives by, often in quiet ways, that add together to create the sum of important change and opportunity for others.

As our visit concluded and we prepared to walk outside for a photo op that could never capture fully the essence of this leader’s gentle yet firm guidance, Mrs. Williams commented, “I never had any idea I’d be in a position like this. It’s God’s plan.” Considering the Holy Spirit fruit that surrounds her, I have no doubt about the truth of her words.

Arts, Books, and Media
By Michelle Ami Reyes
Becoming All Things: How Small Changes Lead To Lasting Connections Across Cultures

Take a peek into an excerpt from Michelle Reyes's recent book on cross-cultural engagement.