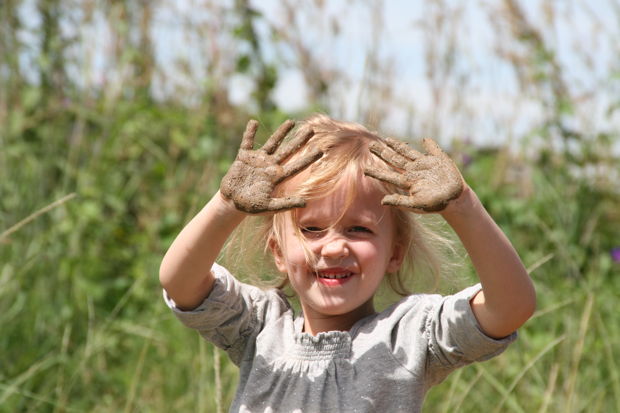 As a junior in high school, I signed up for a ten-day canoeing trip into the lakes and portages of Canada where no motorized vehicles go. The month of our trip brought record high rainfall, leaving deep mud at every crossing. Some days we paddled across wide lakes of chopping waves that splashed into our canoes, only to wade out at portages and carry our packs and canoes from lake to lake, swatting mosquitoes while we trudged through brown streams of mud as deep as our waists. I was a scraggly, thin, high schooler who had never canoed before, and this was more work than I had ever experienced.

But there in the mud something happened. Not only did I learn to pick up a canoe and balance it on my shoulders, to slip and drop it the mud, prop it up again, and keep walking; I also learned that this was joyful. On one portage nearly a mile long, I tripped and splashed forward, falling face first into slimy muck. My canoe caught between saplings so tightly I could not budge it. Moments later, a friend behind me stumbled too. We worked for several minutes trying to free my canoe, then flopped down together, too exhausted to move. Then we picked up handfuls of mud, threw them in the air, and cried and laughed at the same time.

That’s what you find in the mud: laughter and tears in the same breath. The same is true in the messiest moments of the Christian walk: there is despair matched by God’s concern and God’s gift of joy.

The trouble with being a Christian is that it’s so hard. For some of us, being a Christian was hard from the very start. We were immersed in peer groups that called Christianity silliness, who thought we’d lost it when we went off the deep end and started following a dead man from long ago named Jesus. For others of us, following Jesus started as a fabulous ride. We accepted Christ as our Savior in a rush of jubilant emotion, tears unloading the weariness of our hearts. And for some it was just a slow process of meeting Christians, loving their company and the truth they believed, and meeting the God who wraps us in love beyond our comprehension.

Whether or not it was easy from the start, Christianity eventually gets hard. Jesus promised it would. He told his disciples in John 15:20, “Remember the words I spoke to you: ‘No servant is greater than his master.’ If they persecuted me, they will persecute you also” (NIV). Not only do we face persecution, we engage in a battle unfolding against the powers of evil, a battle that God will win but that in the present is rarely easy.

At the point when following Christ becomes hard, we face a choice. We can perform mental and theological gymnastics to justify skirting around the hard parts. In the same way we wipe away grime with a thousand cleaning products, we can go to church every Sunday and to work every morning looking like all is well. We can twitter away our time nourishing long-distance internet friendships instead of conversing face-to-face with weirdo neighbors or messed up workmates, or study issues from a distant academic standpoint without ever connecting meaningfully. Meanwhile we can read books published under the name of Christianity that justify how more faith should unfailingly lead to an easier, more comfortable life.

The problem is, that is not what Jesus told us faith looks like. If we go on following Christ through the hard places along the road, we need to make a different choice: to plunge on in. That’s the choice Jesus made.

Christ, the son of the most holy God, “became flesh and made his dwelling among us” (John 1:14, NIV). Paul has the audacity to give us this lovely picture of Christ’s sacrifice not just as a pretty hymn, but prefaced with a challenge: ”Your attitude should be the same as that of Christ Jesus: Who, being in very nature God, did not consider equality with God something to be grasped, but made himself nothing, taking the very nature of a servant…he humbled himself and became obedient to death” (Phil. 2:5-8, NIV). We’re not just supposed to admire Christ’s bravery in combating evil. We’re supposed to get in there and do it ourselves. In the same way Jesus came to this messed up world while it was still messed up, we are asked to enter the messed up places of the world, the muck and the mud.

In my life, getting into the mud has played out in a life-long calling of addressing global poverty, a journey that has led sometimes into literal mud. Soon after we married, my husband and I spent a year in a remote village in Nicaragua with no electricity, unsanitary water, and plenty of dust and mud. Later we moved to South Africa, where we worked with a microfinance project and later taught in a seminary.

During those years, I saw the mud and the muck of the world face-to-face. Early in our year in Nicaragua, we joined a woman from the village in planning one of the first church services ever held in the village. On the day of the event, her husband and several other men from the village got so drunk that she had to stay home protecting her children and her home. Later that year we watched a drought and a glut in world coffee production combine to wipe out the entire annual income of the village. When we lived in South Africa, we worked with a microfinance project and watched dozens of people who desperately needed to earn money from small businesses defaulting on their loans because of personal sins. At the same time, we saw AIDS killing off leaders and parents, leaving behind orphaned children, including young girls who slept with older “sugar daddy” men just to put food on the table. Later I saw seminary students have to drop out of pastoral training because their congregations could not raise the money to cover even the relatively low price of their tuition.

In the face of these situations, despair lurks in every corner. Often we see no results from our hard work and prayers. We are tempted to sidestep onto easier paths, to give up following God’s call to care for people with shattered lives caught in unjust systems. But as the hymn reminds us, “Though the wrong seems oft so strong, God is the ruler yet.”

Poverty is one symptom of the muddy wrongs in this world, but not the only one. In your life, entering the mud might look very different. You might need to stay at home with a baby or toddler while you’re longing to go out and do something more radical. Or you might need to have an honest conversation with a sister in a bad relationship. Or break the habit of lying in bed long past when you know you should get up. Or join a movement campaigning against an unjust system. Or study with a classmate on the verge of failing. Or hang out with a pot-smoking neighbor, your parents, or the totally judgmental Christian you can’t stand. Wherever your mud may be, God has work for you to do, and shaping to do in you.

In the midst of some of the darkest days of my first year overseas in Nicaragua, my father sent a letter reminding me of Psalm 30:5, “Weeping may remain for a night, but rejoicing comes in the morning.” Truly joy did come through that year. I experienced the miracle of my first cross-cultural friendships bonded by Christ, and learned that laughter does not depend on having material possessions. In the driest months of the year there were days when Psalm 4:7 described us: “[God has] filled my heart with greater joy than when their grain and new wine abound.”

Later, by God’s grace, my husband and I connected the village to a lasting partnership with an organization that sells their coffee at fair prices and has built a new school and water system in the village. All this God had in store even when we could not see God’s purpose keeping us there, in that mud.

Whether God leads you along easy, clear roads or stormy roads, there is joy along even the darkest road. As Job was told in his darkest hours, “Surely God does not reject a blameless man or strengthen the hands of evildoers. He will yet fill your mouth with laughter and your lips with shouts of joy” (Job 8:21).

When we accept God’s challenge to go on following him in the face of difficulty, we may not see the fruit of our labor for weeks, years, or a lifetime. But we have assurance that when we walk with complete reliance on God, trusting him for the power to confront the mess, the sin, or the evil before us, he makes joy spring up even in the mud.

In Focus
By Debra Sulai
By Grace and Faith: Resisting the Academic Meritocracy

What difference might it make to record a list of God’s gifts? Author Ann Voskamp found it life-changing.