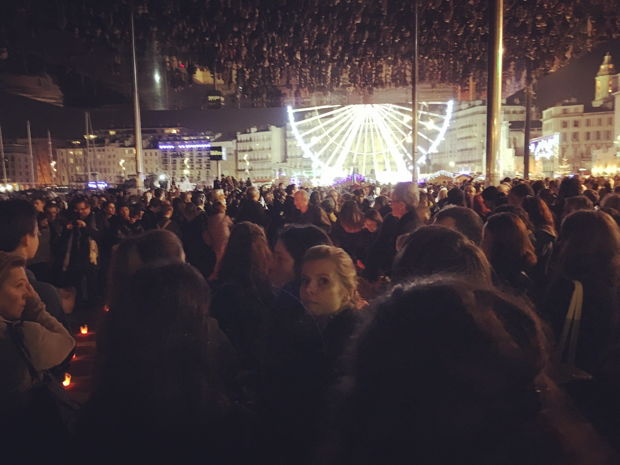 I come by fear honestly. It’s embedded in my genes, not the best gift among the other better heritages that live down the lines of my family. I first climbed deeply into the pit of fear when I was about 13 years old. I was dragged down there initially by some thyroid hormones that were out of whack, but I wasn’t released from the prison just by correcting the hormone levels. Fear had gained a foothold and wasn’t quick to relinquish it.

By my early 20s, I’d mostly climbed out, but soon, in my mid-20s and partly triggered by stress, I was plunged deep again. I finally went to counseling and was nearing the end of the recovery road in 2001 when four planes were flown into buildings and fields around the United States, in places I had lived, no less, and places where I had friends — places that were known to me.

Our entire country was plunged into the depths of fear. So I was confronted by the choice of whether to join my compatriots. Because fear is a choice, you see. And I chose then not to jump back into the prison I had only recently escaped. I had begun to taste the freedom of a life in which fear doesn’t dominate. And such a life was real life, a million times more full than the one “lived” in fear’s prison.

In the mysterious way of the Lord’s work in our lives, he had been releasing me from fear, in part by drawing me closer to him, into deeper dependence on him. At 13 years old, it had been the fear that was the turning point in my adolescent relationship with the Lord: I had to seek someone who was greater than the things I feared, and in seeking him, my relationship shifted from being an acquaintance with someone grand whom I was trying to please to a real relationship with someone who loves me.

I believe Scripture gives words again and again to what I’ve experienced firsthand: As God has released me from fear’s control and put my life under his control instead, I’ve been released to live life more nearly as God has intended. I’ve been free to pursue the paths the Lord has laid out for me, paths that wind through unknown places and have ends I can’t see, paths that lack nearly all the security our culture has taught us to value. Fear would have loved to keep me from the rich vistas of these byways and from the gifts I’ve given and received along their way.

Most recently, these byways have been French ones, since my arrival in France, potently, on September 11, 2012, to study the language. But they have also wound around the world from Zimbabwe and Congo, to Haiti and Brazil, to India and Bosnia, and more. My very not-financially-secure work as a freelance writer has given me conversations with fascinating people the world over, ranging from American women living in housing projects to a former president of Uganda. It has also been the fodder of much of the Lord’s discipling of me.

If I had let fear lead the way and had chosen instead a “secure” life, I would have missed out on these experiences and conversations and relationships and the resulting growth. And that’s the thing with fear. Fear wants to make the decisions. So when we give in to it, when we pursue safety above all else, at least two things happen. First, we’ve displaced the role God wants to play in our lives and, thus, in our world. It should be the Lord making the decisions we follow. Not fear. And second, we’ve bought into a lie. No matter how hard we try, true safety isn’t actually possible. There are always things that fall very far outside our control.

Now I’ll be honest: this is not all to say that I no longer experience fear. I’m as nervous as the next person when the airplane hits some turbulence or I encounter some other name-your-scary-scenario. But with deep dependence on the Lord, I work hard not to let fear make my decisions for me, and I’ve never regretted that.

It’s important to acknowledge that idolizing safety and comfort are cultural values in America, and other places too. But these are not biblical values. The Bible is chock full of stories in which God pushes his people into very uncomfortable situations, pushes them out of their comfort zones. When his people accept his nudges and leading, God gets the glory, and no matter how hard the road is, we who follow it live and live better for our obedience, whether that road leads us to Africa or to invite our neighbor over for dinner.

It's one of those great paradoxes in life that fearfully trying to avoid all threats actually imprisons us rather than freeing us. It's in facing the things we're afraid of, rather than shrinking back from them, that we find real freedom and flourishing and that fear's power is dismantled.

We live in an era in which big, complex questions are being debated — for example, should we let refugees into our country? — and there’s no ten-step checklist for determining how to achieve the most good for the most people. The same relationship that we cultivate with the Lord to keep fear at bay should also guide us as we communally and individually make thick, hard decisions. I don’t think Scripture recommends taking risks simply for the sake of taking a risk, for the high of living to tell about it. But I do believe it guides us to listen deeply for the Holy Spirit’s voice and to go where that voice leads, knowing that whatever risk we find there has less power than God does.

If the Christians among us really believe what we say we believe — that we are in relationship with a God who is bigger than all of the world’s scary things and that we know what our ultimate good future is — we have no reason to live in fear, because life on earth is not the end. Rather than seeking safety as our guiding goal, we must be seeking relationship with the God who is bigger than all of the possibilities that make us quiver in fright.

Sometimes this God asks us to trust him enough to take some risks for the greater good — and amazingly this is actually where we find the very thing we wrongly think pursuing safety will give us: a full, flourishing life that rests along the byways God has created us to follow.

Nearly three weeks ago, as news of the November 13 terrorist attacks in Paris began making their way around the world, concerned friends began posting on my Facebook wall and texting me. My French home is quite far from Paris — in Marseille, which is on France’s Mediterranean coast, seven to eight hours away by car  —though I had visited the City of Light briefly two weeks prior.

As messages rolled in, I was struck by the repetition of two words in particular: safe and safety.

I, too, was glad I was safe. I was glad my Parisian friends were safe.

But I still find myself wondering how well we believers cling to the angel’s words to a group of shepherds one night long ago: “Do not be afraid; for behold, I bring you good news of great joy which will be for all the people; for today in the city of David there has been born for you a Savior, who is Christ the Lord.” (Luke 2:10-11, NASB)

How do you develop a deeply formed Christian way of understanding the paradigms of your discipline? Dr. Garber teaches that “the stuff of our work” matters to God and is integral to God’s purposes in the world.