In Focus
By Caryn Reeder

Revisiting the Woman at the Well

The Samaritan woman at the well is no angel. Mixed up with a wrong crowd, this poor woman from Samaria has quite a reputation. She had been married five times and was living in sin with a man who wasn’t her husband. Through her story comes the lesson that people shouldn’t live by carnal pleasure . . . . Jesus has a lengthy but candid dialogue with her. He makes her understand that she needs to confess her sins and change her life before she can obtain this life-giving water — grace. (John Triqilio and Kenneth Brighenti, Women in the Bible for Dummies1)

The priest at St. George’s went another direction with his sermon that morning, barely touching on John 4 at all. But since I have your attention, O Reader, let’s think through the woman’s story. 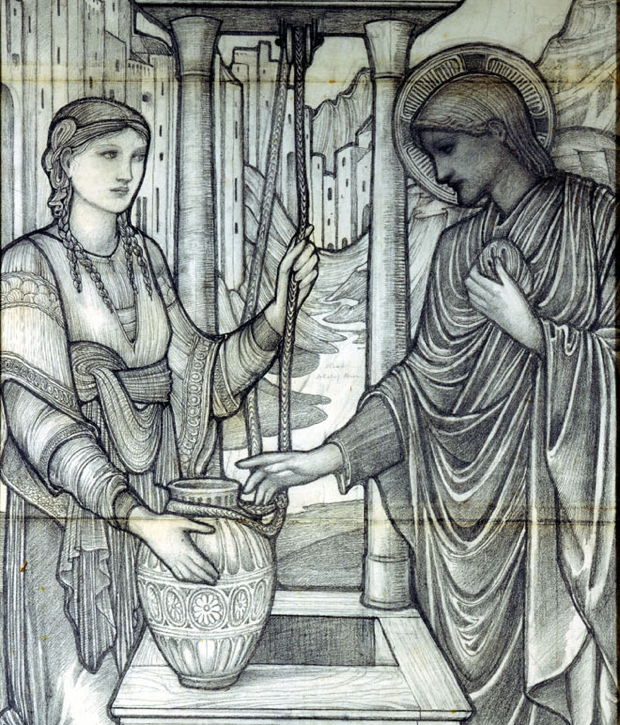 Jesus and the Woman at the Well by Edward Burne-Jones.

The story starts with Jesus, tired from a long morning walk, sitting by a well, when a woman approaches to draw water. This scene sets the stage for the classic biblical meet-cute: Rebekah and Isaac’s marriage broker (Genesis 24:10-27), Rachel and Jacob (Genesis 29:1-12), Zipporah and Moses (Exodus 2:15-17) — they all met at wells. It’s a good place for a thirsty man to pick up a woman. The introduction to this story in John’s gospel raises these expectations for the audience.

The expectations are immediately challenged, though, by the woman’s identity: she is a Samaritan! And, as the narrator reminds us, Jews won’t have anything to do with Samaritans. The Jews saw the Samaritans as ritually unclean, and thought that contact with Samaritans would make them unclean too (see Mishnah Niddah 4.1-2). The woman is understandably surprised to find this Jewish man at her village’s well, talking to her and asking her for water. She may have even been afraid to find herself alone with a Jew, considering the very negative view of Samaritans held by the Jews — Josephus, for instance, calls them evil, envious, and enemies (Antiquities 11.84, 114; cf. John 8:48, Luke 9:52-54), and Jewish-Samaritan violence was common.

The second surprise comes in John 4:18: the woman is not single. She has been married five times, and she’s currently living with a man to whom she is not legally married. This summary of the woman’s marital status is the source of the assumption that the woman is a vile sinner. But consider this:

The Samaritan woman’s marital status may be unusual — she seems to have been particularly unlucky with respect to her husbands. Her marital history, however, does not make her a sinner. So why does Jesus bring up her marital status in John 4:16-18? The answer is in the very next verse — when Jesus tells the woman her own story and she realizes he is a prophet. As with Nathanael in John 1:47-49, Jesus’ revelation of the woman’s personal history reveals his own identity to her. She later uses his knowledge to encourage her friends and neighbors to meet him (John 4:28-30, 39) — another sign that John does not present her as a sinner or social outcast, since her neighbors listen to her.

So, John 4 is not about sin. It is about salvation (see verses 14, 22-24, 35-38, 42). The question of salvation in John 4 centers on the identity of the people of God. Here is where the location of the story in Sychar (ancient Shechem — modern Nablus), at Jacob’s well, becomes important. Apart from the tombs purchased in Genesis 23, this land was the first bit of the promised land owned by Abraham’s family (Genesis 33:18-20). But by Jesus’ day, it was part of Samaria, inhabited by Samaritans. Moreover, the Samaritans had built their temple on Mt. Gerizim, looming over the city. Instead of being the ancient equivalent of a singles’ bar, the well in John 4 symbolizes contested space.

When the woman asks Jesus about worship in John 4:19-20, she is not deflecting attention from her marital status; she’s rather taking her chance to question this prophet on the issue at the heart of the centuries-long divide between the Jews and the Samaritans (cf. Ezra 4:1-5). Should God be worshiped in Jerusalem, like the Jews say? Or on Mt. Gerizim, like the Samaritans say? Which people is truly God’s people, the descendants of Jacob (note John 4:12)?

Jesus tells the woman that the place of worship does not matter. With this simple statement, he dismisses the battle for space, for ownership of the land. He does not dismiss the question of identity completely, however. In fact, he upholds the identity of the Jews as God’s true people (note verse 22: salvation is “from the Jews”). He goes on to say that this identity is changing: “The hour is coming, and now is." Right now, in Roman-occupied Palestine, in the city of Sychar, as Jesus is talking with a Samaritan woman, things are changing. The question of identity is no longer about Jew or Samaritan, but about “spirit and truth” (John 4:23).

In twenty verses, John’s story moves from meet-cute to the specter of racism to a question over national and religious identity, to finally end with the village of Sychar believing that Jesus is “Savior of the world.” And the woman with the unfortunate marital history, the woman who happened to come for water as Jesus was resting by the well, is the center of the story. She recognizes who Jesus is, and she tells her neighbors about him. While Jesus’ disciples are worried about feeding Jesus, she’s doing the work of Jesus’ ministry. Despite the claims of Women in the Bible for Dummies, the Samaritan woman is precisely an angel, ἄγγελος, a messenger to her people.

1Please note, I do not in any way recommend this particular resource for your biblical research!

2If you want to know more about marriage and divorce in the New Testament world, see Lynn Cohick, Women in the World of the Earliest Christians (Baker Academic, 2009).

Caryn Reeder is professor of New Testament at Westmont College in Santa Barbara, California, but she spent the 2013-2014 academic year as a Fulbright Scholar at Bethlehem University in the West Bank. She's researching and writing about the realities and rhetoric of women, children, and warfare in the biblical and classical worlds.

What do you need to get your job done? Are you comfortable asking for it? Sharon Gartland sees biblical precedent for our requests.