In Focus
By Halee Gray Scott 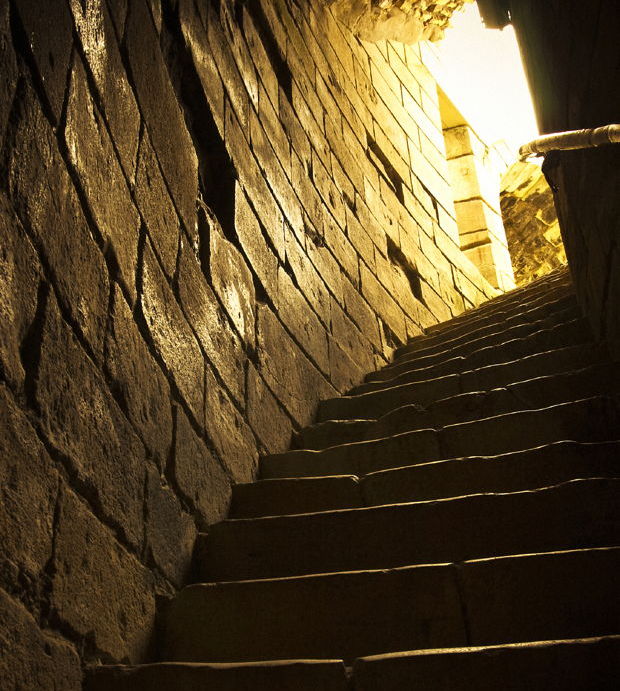 From the colonnade of St. Isaac’s Cathedral in St. Petersburg, Russia, you can see all the way to the end of the world — or at least to the end of the small world of Russia’s Window to the West. To the north you see the Admiralty and the vast, imposing Winter Palace. Across the Neva River, you see the golden spires of the Peter and Paul fortress, where writers such as Dostoevsky and Nikolai Chernyshevsky were imprisoned. From the colonnade, you see the busy and bustling business centers on Nevsky Prospect, the humble abodes of the city-dwellers, and the aging, idle smokestacks from another era.

But getting to the colonnade is no easy feat. To reach the colonnade from the cavernous, elaborate cathedral below, designed to hold 14,000 worshipers, you must make an arduous climb up a circular stairwell comprised of 262 stone steps worn smooth from over a century of use. Some choose not to visit the colonnade at all, while others give up and turn back halfway through the journey.

Like St. Isaac’s Colonnade and Cathedral, I’ve always viewed the ministry of the church as a two-level structure joined only by a narrow, dimly lit staircase that few choose to travel. On the upper level, the colonnade, the biblical scholars, theologians, philosophers, and other academics are doing their work to advance the kingdom of God. They are interpreting difficult passages of Scripture, untangling and dismantling contemporary threats to orthodox theology, and vigorously debating the secular philosophies of our day with the knowledge that today’s philosophies become tomorrow’s governing worldviews.

But on the lower level, in the cathedral, you have the people in the pews. There is the single mom trying to feed and clothe her children, not to mention raise them well in a culture set against her. There are parents who have buried their children, women struggling with cancer, men who have lost both their jobs and their homes. There are young girls fighting eating disorders and men struggling with an addiction to pornography.

So what does the colonnade have to do with the cathedral? “What,” as Tertullian questioned two centuries after the birth of Christ, “has Athens to do with Jerusalem? What communion is there between the Academy and the Church?” Athens, the epicenter of philosophical and intellectual inquiry, symbolized reason, while Jerusalem, the holy city of Judaism and the birthplace of Christianity, symbolized religious faith and spirituality.

The questions Tertullian posed resound throughout the centuries, and many prominent teachers and pastors believe that the colonnade, the upper floor, has nothing to with the cathedral, the lower floor. As one prominent Bible teacher wrote, “Psalms 131 reminds us that the word of God is not primarily for seminaries, dissertations, and theological treatments. It is primarily for everyday living on the third rock from the sun.” These teachers and pastors would rather there be no colonnade, no upper floor at all because of its seeming irrelevance to the cathedral.

Yet, these same teachers and pastors rely on the commentaries and teachings of those in the colonnade to perform their ministry, so to remove the colonnade from the cathedral is a grave error. A far better solution is to recover the lost art of stair-running. Stair-runners make their primary place of calling in neither the colonnade nor the cathedral. They are sojourners whose calling is to make the long, arduous journey between the colonnade and the cathedral over and over again. They are those who understand the issues, the passions, and the calling of the people on both floors.

To become an effective stair-runner, four things are essential:

I began my love affair with seminary, with the colonnade, 11 years ago when I was working as a representative for a counseling ministry while I was in college. My job was to take calls and determine through the individual’s story the best way I could help them find treatment. Year after year, as I listened to their stories, I became convinced that many people experienced undue suffering simply because they had an inadequate view of who God was and thus, a poor relationship with him. I wanted people to know him and enjoy a right relationship with him, so I determined that I would pursue a PhD in Systematic Theology so that I could be equipped to teach people to think correctly about God.

I obtained my master’s degree in religion, with an emphasis in theology and ethics, with honors. Then, one fateful evening I sat in our living room surrounded by boxes, fresh off the road from our move from Texas to California. In my hands I clutched the acceptance letter for the PhD program in Systematic Theology from Fuller Theological Seminary. I was bursting with excitement: my dream was within reach, within my grasp. Then I heard the quiet voice of my husband sitting beside me amidst all the boxes, saying, “You’re not a systematic theologian, Halee.”

The words took my breath away. What was he saying? What had I been working for all this time? Was I not smart enough, not talented enough? What was it that I lacked? I loved theology and I loved the life of the mind, and I told him so. He reiterated, “Yes, you love theology, but you love even more to see theology in action in the lives of people who need it most. A degree in systematic theology would only distance you from those people and distance you from your true calling. You’re a stair-runner.” My husband, the counselor, knew my passion for theology, but also knew my passion for the people in the pews and my other primary areas of giftedness. He has always given me great freedom to chart my own journey, but that evening he felt compelled to share his own insights on the matter. And God used his words to carve out the contours of my entire calling.

From the start, being a stair-runner has not been an easy endeavor. First, I had to look for a new program that would better suit my calling. When I informed my mentors of my new plans, they expressed nothing short of horror. They would have rather had me go to Fuller, to Claremont, or to Harvard. And I had to humble myself. As much as I loved systematic theology, part of the reason I wanted the degree was because I thought it would be one of the hardest things I could do. I love challenges. It's just part of my personality to pick the toughest road and I thought this was it.

But being a stair-runner has provided its own great challenges. As a stair-runner, I belong to both the colonnade and the cathedral, but there are many times when I feel as though I belong to neither. I am not fully comfortable in the colonnade working with ideas and philosophies that never get fleshed out in the lives of real human beings, but I am also not content to remain in the cathedral.

Another real challenge is the absence of maps for stair-runners. Without these guides, I have created my own. I made a commitment when I began my PhD program that every academic paper I wrote I would turn into a popular article or eventually, a book. When I teach heavily philosophical or theological material, I leaven it with narratives and class-wide discussions I call “Where the Rubber Meets the Road.”

And it is a challenge to learn two languages, the language of scholars and the language of everyday people. But stair-running is ultimately the work of a translator, and as a stair-runner I must, in a sense, be bilingual.

Many women academics struggle to integrate their academic careers with their desire (or their identity) as a mother, because, among other, more practical reasons, academia is concerned with the mind and motherhood, pregnancy, childbearing, and child-raising are so much about the body. Motherhood, in a sense, grounds us to life, to reality. But being a stair-runner has taught me to never separate life and scholarship. I unapologetically taught my first seminary class when I was six months pregnant. I took my comp exams three days before I delivered my first child. I wrote my dissertation the first year of my child’s life. My daughter will never take a backseat to my career, and yet I am truest to her when I am true to my calling.

So here I stand in perpetual, inevitable tension, clutching scholarship, the colonnade, with one hand and life, the cathedral, in the other. But as a stair-runner I know that the two are not as incompatible as they have the reputation to be and it is the task of a stair-runner to unify and bring honor to both.

Halee Gray Scott, PhD, is an author and global leadership researcher and consultant who focuses on issues related to leadership and spiritual formation. Her book, Dare Mighty Things: Mapping the Challenges of Leadership for Christian Women, is published by Zondervan. She teaches seminary courses in spiritual formation, theology, and leadership in seminaries across the country. She is a regular contributor to Her.Meneutics.com and her writing has appeared in Christianity Today, Christian Education Journal, Real Clear Religion, Relevant, Books and Culture, and Outcomes. She lives in Littleton, Colorado, with her husband, Paul, and their two daughters. When she’s not writing or teaching, she is usually baking challah bread, running, or doing Crossfit. She blogs at hgscott.com

Reflections
By Michelle Van Loon
Learning to Write in Pencil

Michelle Van Loon relinquishes her hold on her pen in favor of offering her daily plans to God.

In Focus
By Andrea E.
A Biblical Defense of Curiosity

Is study in itself a worthwhile pursuit when there are real-world problems to be solved? A professor offers her reasoning for pure research as Christian work.