Advent is a very female season. The pregnant young Mary is front and center in this seasonal storyline and the metaphor of expectancy and birth runs through the whole thing. I have always had a preference for Christmas decorations that reflect the true biblical cause for celebration. This past January, I purchased (on discount) a beautiful figure of the extremely pregnant Mary sitting on a donkey, presumably on her way to Bethlehem. She looks uncomfortable and physically awkward, precisely how it feels to be in your ninth month of gestation. It is hard for me to imagine the discomfort of riding a donkey for miles (or for that matter, walking for miles) during that last trimester, but Mary was no wimp. 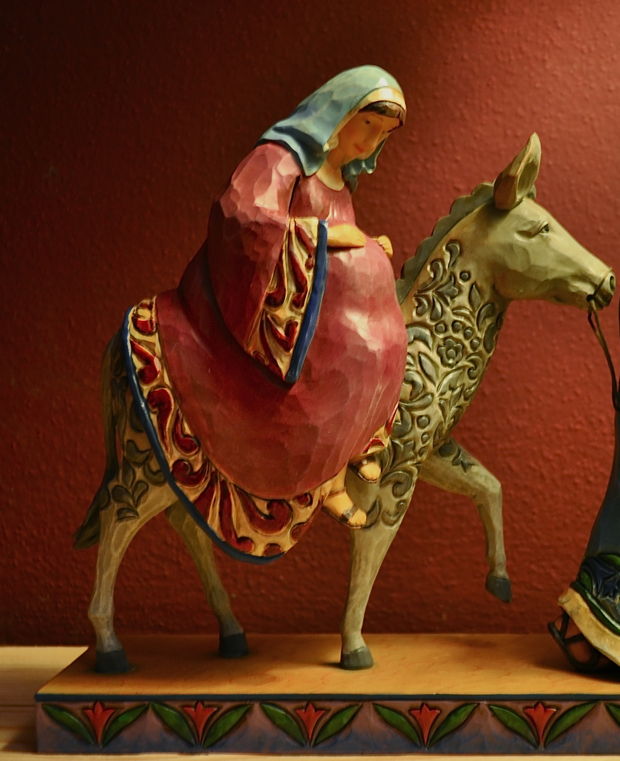 Mary is about to do an amazing thing. She is about to give birth to the Savior of the world in less than ideal conditions and with no epidural. Her accomplishments are impressive, but I admire her most for saying yes to God’s invitation to play a part in his Grand Story. From the first announcement from Gabriel to her older years spent launching the early church, Mary seemed to say “I’m in.” She recognized God’s invitation (granted, this may not have been so hard coming as it did with an angelic visitation) and responded in faithfulness and joy.

I’ve been having a lot of conversations lately about pregnancy with female grad students and professionals who are trying to figure out if they should have kids and when they should launch the project. Considering this uniquely feminine experience elicits fear, longing, confusion, anticipation, and more. Knowing that I have children, a young academic colleague recently asked me if I thought it was worth it. She prompted my answer by asking, ”It’s the best thing in the world, right? Something you would never want to miss out on?”

I was tempted to give her what she wanted, the assurance that motherhood is a deeply fulfilling role and makes you feel like you are living in a Hallmark card. But the truth is so much more complex than that. Saying yes to God’s invitation to grow a life in your body and then spend years nurturing and raising that life is truly one of the most fabulous and remarkable things I’ve ever done, but it does mean saying no to some of life’s other invitations. Mary’s yes to bearing Jesus meant no to a scandal-free marriage and spotless reputation. Mary’s yes to raising the Messiah meant no to having her first-born son around to care for her in her old age. Mary’s yes to serving as an early disciple of the Christian church in her later years meant saying no to a simple, restful, old age.

Each of us needs to learn to discern which invitations are from God and then, like Mary, have the courage to say “yes!” My yes to bearing and raising four children has meant numerous no’s to opportunities on my career path and no’s to alternate ways, some very good ways, to use my time. Perhaps for others, your yes to become a professor, a business woman, a doctor, a graduate student, has involved saying no to other worthy options life might offer you. There is no singular “best thing in the world” for all of us to do as women, other than to be a faithful part of what God is doing in history.

My advice to each of us is to structure our daily lives in such a way that we don’t miss the invitations from God. Let us begin each day giving God permission to speak into our choices and ask to be open, like Mary, to hearing God’s voice. The Advent season is a fabulous time to start that life pattern. Granted, it is a busy time, especially in the academic calendar with finals and papers, end-of-year projects and grading. As for me, I’m going to place my Mary figurine prominently on my desk and let her example inspire me.

Bette Dickinson talks with us about observing Advent when schedules are full, the spiritual power of art, and the joy of embracing our human limits.

Join us for a practice of short, manageable reflections together this Advent. In our first episode, we take some time to look back over the past few months.

Blog
By Anna Moseley Gissing
Advent: The Practice of Waiting

During Advent 2009, I was “great with child.” In fact, when we introduced our newborn daughter to our toddler son in early January, he mistook her for the baby Jesus. Pregnancy reminds me of Advent...