God is gracious even with our memories.

I wept on the plane as we departed Bangui, feeling memories seep from my thoughts as water through a sieve. I desperately tried to record them as they drained one by one — Maurice flicking his ear when he is nervous, Marie-Claire calling Lily “Leelee!,” André laughing with a high “Whoo hoo!,” and Seraphin, oh, dear Seraphin, unknowingly hitting his head when he tries to speak English.

But today, months afterwards, my memory of my short time in the Central African Republic with InterVarsity’s Women in the Academy and Professions Global Project reduced to snapshots and two-line summaries, I am sitting in another airport, and suddenly I am flooded with vivid images of our early morning arrival in Bangui and the two weeks following.

We arrived on the dark tarmac of the Bangui airport at 5:15 AM. As I climbed down the stairs the moist air engulfed me — not hot, but thick as the darkness that hung around us. On the descent into Bangui, a few dim lights had distinguished the city from the river, but here on the ground, everything seemed black, except for the bright room that drew all new arrivals like moths to a flame. Packed into the room, we tried in our sleep-deprived and disoriented confusion to find a place to fill out our entry tickets — “What does this mean? What did you write here?” — and I tried not to stare at the women in formal African dress greeting the recent arrivals.

Augustin Hibaile and David Zokoe greeted us with handshakes and as much smile as they could muster at 5:30 AM. I had heard of Rev. Dr. Augustin, executive director of CIDEL (International Center for the Development of Ethical Leadership). Still, I was startled to find that the man with the reputation for fighting corruption in Central Africa — grown so large in my head — was only five feet tall and dressed in a safari suit. “Baba” Zokoe, I later learned, had moved through the ranks of government up to Minister of Education, and is now on the board of CIDEL. To me, he was a quiet, kind, humble old man, whose trembling limbs were noticeable to anyone. Yet he seemed tireless. They shuttled us to the VIP room — VIP treatment for government guests — where we sank into couches, rising briefly for the occasional introduction to people with official titles I tried with jet-lagged mind to grasp. All the people we met that morning were a blur, not being sure whose face I should keep hold of, and whose I would never see again.

We waited in the room for at least an hour while Maurice fetched our bags from the pile that was the “baggage claim,” using just our baggage claim tickets. It is no surprise it took him so long. We waited, hungry and needing coffee. In the VIP restroom, I discovered the necessity, even with VIP treatment, of travel toilet paper.

This first hour was also our introduction to the difficulty of making small talk in a foreign language. The challenge this early in the morning was just too much and we reverted to sleeping or watching the TV in the corner. I remember a creeping sense of guilt that I was watching TV, wasting precious moments that could have been spent struggling through a conversation to learn more about the Central African Republic. My team of five women would only have two weeks to work with the University of Bangui to address the “problem of women dropping out of school,” as we had been invited to do by the University. As graduate students (including myself) and InterVarsity staff we were eager to address the issues in women’s education that the University had identified, and to learn all that we could from our experience. But on that first exhausting morning it was too hard to know where to start.

Marie-Claire, our faithful follower for the next two weeks (though we never could carry on a conversation with her), was there even at the beginning. I think she must have waited at the van for hours that morning. Probably Seraphin too, but I can’t remember. By the time we left it was light, so we could see the new landscaping on this flat terrain around the airport. “No pictures!” they warned us, or we might have our first run-in with the police.

The ride into Bangui along a dirt road — or maybe a paved road in bad shape — took us through the most depressed area I saw during our whole stay. Or perhaps I just adjusted my expectations of living conditions in Bangui as time went on. Already at 7 AM the streets were lined with people walking their goods into the city, or setting up their stands along the side of their shanties. I remember seeing stand upon stand upon stand of baguettes. All was red dirt and muddy brown stalls except for the African cloth — bright busy patterns that brought life and stimulation to the eyes.

The ICDI compound (Integrated Community Development Organization run by the Grace Brethren Church) presented yet more unknown but welcoming faces — the 24-hour guard, the staff, and our housekeeper André. Even better was the smell of André’s cinnamon rolls — not something I ever expected in Bangui. Nor did I anticipate the cold air in the bedroom blasting from the AC unit, even though the windows were missing panes. We welcomed the cool during our rest before going to the Embassy to get our passports stamped.

This was our first venture into the center of Bangui. It is one traffic circle. Not even a very big circle. Down one street, the center market (not the big, low-cost one, but the smaller, safer one); down another, the US Embassy and some government buildings; down another, ambassadors’ residences. In other areas of Bangui we did see evidence of its entry into the 21st century — the massive stadium and beautiful new hospital (both built by the Chinese), the Chinese Embassy, and the Prime Minister’s building. These sights would come into our view as we rode — because our hosts insisted on driving us everywhere — the few blocks to each of our meetings. But on this first day, we were surprised by the modest size of this capital city that claimed its name with the Hollywood style neon sign on the side of the hill overlooking the city.

In my memory it seems those first few days were meeting after meeting: sit down here, stand up now, state your name, let your (male) chief state your mission, thank you, shake hands, leave. I can feel myself growing edgy again. Apparently I didn’t hide my feelings very well. The Minister of Education singled me out in the middle of the meeting: “Is there something wrong? She looks displeased.” I had no idea he was watching us. “No!” I said. (“Well, maybe.”) I thought my solemn face would blend right in. But he apparently could sense my growing displeasure with all the ceremony. The American “cut to the chase and get down to business” approach that I normally deplore began to have its appeal. I imagine American anti-formality too is a strange ritual that must be endured by those who are foreign to it. Still I struggled to quiet my inner voice that cried, “ At least let us speak for ourselves!”

Most days blend together but I remember that we saw the Prime Minister on a Tuesday. I remember because he made me smile. He was the first official we met who didn’t seem to care about “protocol.” He looked us each in the eye, and asked Sally, our team leader, to speak. He shook the hand of every person in that room. He asked us if we had any questions. What care! Maybe he was just catering to our culture, learned from all his political work abroad. Even so, or even more, we felt cared for. I learned afterward, confirming this initial assessment, that he was criticized when he came into office for his policy of considering everyone in his building, from soldier to janitor, important enough to be greeted.

It didn’t help my anxiety about being useful and productive when we found out from Mme. Biteman, head of the teacher’s college, that nothing had been done with the survey we had sent them. We couldn’t analyze date we didn’t have — what were we going to do for two weeks with this committee of mostly female faculty? We were scheduled to teach some English conversation classes, but even for this, the expected class of English majors had not been contacted. There had only been a general invitation given to anyone in earshot, whether English student or not.

We prayed a lot during that first week. “Lord, give us eyes to see. And patience.”

Look! See that God has prepared for your coming to Bangui: time to question a professor on her education; a minister of the government who, when given the opportunity to speak, pours forth her struggles, her triumphs, and her commitments; women working together to find creative solutions for their communities; students setting aside their studies and household duties to struggle day after day through a few English sentences with you.

I know there must have been a middle to the trip, but I can remember only the beginning and the end. And the end more than made up for the difficult beginning. Marie-Claire, that faithful shadow, delighted to share her craftsmanship at her sewing workshop with us, covering us with the bright patterns of Africa, sewn by her fine hand. She took us, much to the dismay of our hosts, to the large, crowded market. As much as it made them anxious, I think our guardian angels (guardians not only of our bodies but also of our schedule!), Maurice, Pierre Brice, and Seraphin, secretly cherished the opportunity to protect us from the petty thieves that frequent the market. More than that, they glowed with pride when they revealed to us, on a tour on our last day, the beauty of their Bangui. 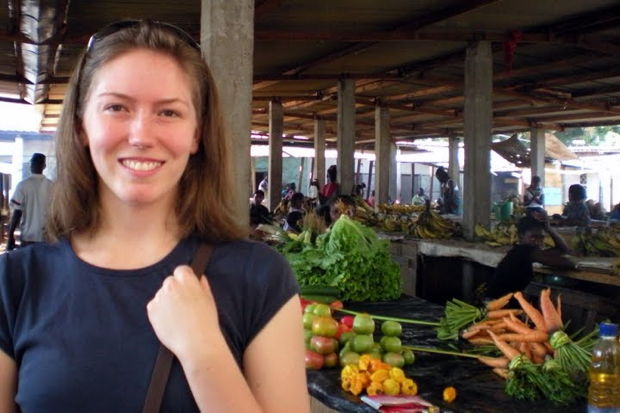 The loveliness of those last days made the goodbyes especially hard. The accompanying question, “When will you come back?” was painful to receive, because our answer was uncertain. Lisette, our interpreter, hung on until the very end, insisting on sitting on the porch as we gathered our things so she would be the last one to say goodbye, save for the entourage that would accompany us to the airport. After two weeks interpreting for us, this bright, generous, humble, witty woman, would return to caring full-time for her four children, with no books, no internet, and no peers with her educational experience. Two weeks of conversations about American literature, Bangui culture, education, ideas, dreams, and God’s promises. What friends will engage that beautiful mind now?

Kate Hope Kennedy is a PhD student in Musicology at Princeton University. Her studies have focused on liturgical music from theological and historical angles. Kate earned her BMus at Wheaton College, and her MAR in Liturgical Studies at Yale Divinity School. She will write her dissertation on the Sanctus music from the 12th century. Once graduated, she hopes to teach music and religion at a liberal arts college. In the meantime, when not in the library, she can be found singing, hiking, and cooking.

Sabrina Chan offers an introduction to this month's celebration of Asian/Pacific American heritage.