“I am about to do a new thing. See, I have already begun! Do you not see it? I will make a pathway through the wilderness for my people to come home, and I will create rivers for them in the desert.” Isaiah 43:19

On June 30th, I flew from London to Johannesburg, South Africa, on an overnight flight. Somewhere over the African continent, I was roused from a half-sleep and cracked open the shade to see if it was morning. There, beyond the wing of the airplane, the sun was just a fragile slither, an orange beam of light held in silent suspension on the horizon. From that vantage point, I could see the stark contrast between night and day, the dark void of shadow and earth giving way to a line of airy bright. It took my breath away. I imagined for a moment that I was staring at hope in its cosmic form. 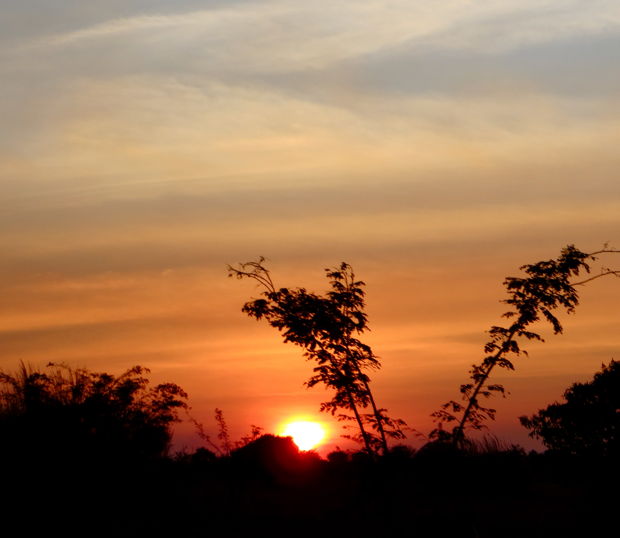 That was my first impression of Africa, a tableau of light and shade. Part of me didn’t want to fully wake that morning. I preferred to remain lost in the stillness of a dawn spent floating in the air above Africa with nothing but white noise and a momentary glimpse of eternity — no questions, doubts, contingencies, or material conditions, just a bird’s eye view of light mingling with dark and becoming day. But I was brought back to my senses by the smell of black coffee, warm croissants, and the acute need to move and stretch my legs.

Days later, at my final destination in Ndola, Zambia, I sat in the cafeteria of Northrise University, a school founded in 2004 by Moffat and Doreen Zimba. The Zimbas are a seemingly ordinary Zambian couple who have done extraordinary things in the name of Christ, taking a giant leap of faith by founding the nation’s first nationally-recognized private university dedicated to transforming the region through Christ-centered education. In Northrise’s cafeteria, with the lingering smell of nshima in the air, I waited nervously to begin a young women’s conference inspired by Beth Moore’s study, Believing God. My contribution was a 60-minute talk about what it means to do all things through Christ.

“I have learned the secret of living in every situation, whether it is with a full stomach or empty, with plenty or little. For I can do everything with the help of Christ who gives me the strength I need.” Philippians 4:12-13

Paul’s words had resonated in my mind when I heard Moffat Zimba tell his story just hours before. Having grown up in a village in Zambia, Moffat learned how to write by carving letters in the dirt with a stick. Despite scant educational opportunities in his country, God gave him a passion for learning, empowering him to obtain a handful of degrees across four continents — most recently, a DMin from Fuller Theological Seminary in California. When God gave the Zimbas the vision for Northrise, they had no visible resources to start a university, only a meager $1,000 to their name. But God made the impossible possible. Northrise is growing and has now graduated over 100 students. These alumni are making an impact, starting schools for orphaned and abused children, pastoring churches, and building businesses that will feed into a struggling economy. The university was recently awarded a 640-acre land grant by the Zambian government to expand the campus, more than they ever thought possible.

“For I can do everything with the help of Christ who gives me the strength I need.” Philippians 4:13

In that same cafeteria, I also heard the astonishing testimony of a Northrise student named Mulenga, a young pastor, who told a stunned American audience a story of biblical proportions. He spoke about being falsely accused and convicted of conspiring with a criminal, ultimately confined to an African prison for two agonizing years. There, he fought off despair by joining a prison ministry. Eventually, he even cared for the man responsible for his imprisonment, a fellow prisoner, tending to the man after a botched suicide attempt despite warnings against offering help by prison officials. Such an act, they claimed, would prove Mulenga’s allegiance and would most surely deny him any chance at freedom.

But Mulenga remembered Hebrews 4:13: “Everything is naked and exposed before his eyes. This is the God to whom we must explain all that we have done.” Mulenga walked in faith and chose the impossible. He nursed the man back to health despite the risk. “My service to my enemy was my expression of love to God,” he explained. “Like the Hebrew people in the wilderness, man does not live by bread alone.” He was released from prison soon after.

I didn’t know about Mulenga’s story when I was planning my presentation for the women’s conference, nor did I know his testimony would directly precede my own. But God did.

God also knew that I had planned to speak at length about the Apostle Paul, in whose life and teachings we find a dramatically similar example of what it truly means to do all things through Christ. Like Mulenga, Paul was asked to do hard, seemingly impossible things. He too was falsely accused and unjustly imprisoned for two years. The book of Acts tells the story of God sending Paul to Rome with nothing more than a promise: “The following night God stood near Paul and said, take courage! Just as you have told the people about me here in Jerusalem, you must preach the Good News in Rome.” Acts 23:11

The harrowing journey to Rome was fraught with danger, including a storm and a shipwreck. But an angel of God appeared to Paul, stood by him, and assured him once again in Acts 27:24: “Don’t be afraid, Paul, for you will surely stand trial before Caesar. What’s more, God in his goodness has granted safety to everyone sailing with you.”

Of course, Paul made it to Rome as God had promised, but Acts concludes without what we might call a satisfying ending. Paul continued to live in bondage under house arrest without any real assurance of safety. He was never exonerated. He eventually lost his life. But still, he welcomed “all who visited him, proclaiming the Kingdom of God with all boldness and teaching about the Lord Jesus Christ. And no one tried to stop him.”

Paul suffered for doing the hard things God asked of him, a point he makes in his letter to the Philippians: “You have seen me suffer for him in the past, and you know that I am still in the midst of this great struggle.” And yet in his suffering, Paul was able to say, “I rejoice. And I will continue to rejoice. For I know that as you pray for me and as the Spirit of Jesus helps me, this will all turn out for my deliverance.”

“But take courage! None of you will lose your lives, even though the ship will go down.” Acts 27:22

As I recounted these events in Paul’s life to the young women at the conference, I remembered how some two years before my divorce, God had sent me Paul’s story in an extraordinary way. My husband and I were living in Memphis, Tennessee at the time and were contemplating whether to move back to Phoenix, where we had moved from only two years earlier. I was uneasy. A few days after asking our young-marrieds Bible study class for an unspoken prayer request, I received an email from one of our classmates. He explained how God had put one particular chapter on his heart to share with us: Acts 27. He couldn’t explain why or how that might help us with our struggle, nor could I figure it out at the time.

I forgot about the scripture until two years later when, looking for something else in my email files, I stumbled upon it again. I was by then in the early stages of a divorce I didn’t choose and beginning to raise a newborn and a three-year-old on my own. I was shipwrecked. Suddenly, God’s purpose in sending that chapter from Acts was clear.

I told the women, too, about hiding in my cellar one night in April of last year. It had been a day of horrific storms, and the same deadly tornado that had struck Tuscaloosa earlier was headed straight for me and my girls in Rome, Georgia. We were in the path of destruction, and I was beyond scared. I thought about Paul that night in the pit of my basement cellar and rehearsed his assurances to the 276 souls on board that doomed ship bound for Rome.

There will be a storm, God had warned me, but “not a hair of your heads will perish.” 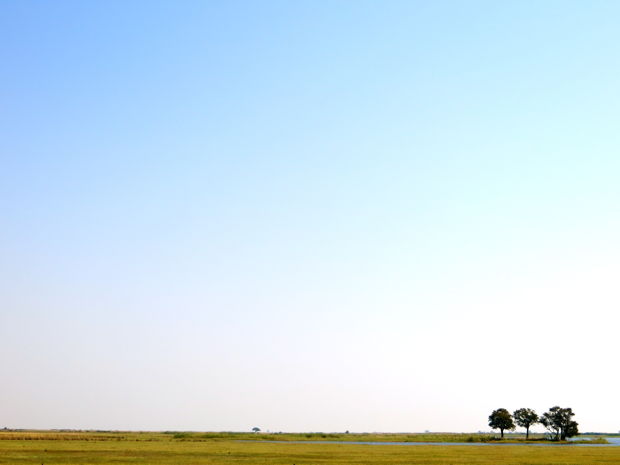 I entreated those beautiful African women, my sisters in Christ, to believe God despite their circumstances and to trust in his goodness, even when he asks the impossible. When he says “no” and chooses not to change the difficult conditions of our life. When he ordains pain that threatens to crush our spirit. When he strips us of security and denies us rest. When our own sin whispers shame and robs us of peace and joy. “Believe God more than what you see, hear, and feel, and he will give you hope,” I said humbly to a room of young women who likely knew more about suffering than I could ever imagine.

Believe God, I say to myself now, and he will give you the strength to do the hard things he has called you to do.

And so, I choose to believe God in those moments when climbing Mt. Everest in ballet flats sounds easier than surviving another second as a single parent. I believe God when I confront a classroom of curious faces and feel like an intellectual imposter. I believe God on those lonely nights when fear imprisons me in a cycle of insomnia once again. I believe God in a world where entropy rules — a world where job security is long-gone but basements still flood, windows still break, home prices are still falling, and gas prices are still rising. I believe God with the grievous knowledge that my pain is but a shadow of what so many people around the world endure every day.

Believe God despite it all, I say, and he may suddenly become, not a means, but the end.

“Take courage!” God said to Paul as he stood near. And Paul rejoiced.

Hope. It is that tenuous ridge of light that separates night from day. Awake my soul and behold it, there, in silent suspension on the African sky.

For more information about Northrise University and the incredible work being done there in the name of Christ, please visit www.northriseuniversity.com.

Podcasts
By Caroline Triscik and Amy Peterson
Amy Peterson: Reclaiming Virtue in an Age of Hypocrisy

Listen in on our interview with writer, teacher, and postulant Amy Peterson as we discuss Christian virtue, our current American political climate, and her most recent book.

Blog
The Lesson of Grace in Teaching

After Francis Su gave his lecture accepting the Franklin Tepper Haimo Award for Distinguished Teaching of Mathematics, he had so many requests for the text that he shared it...

Dorothy Boorse describes her passion for the full meaning of the word "stewardship."