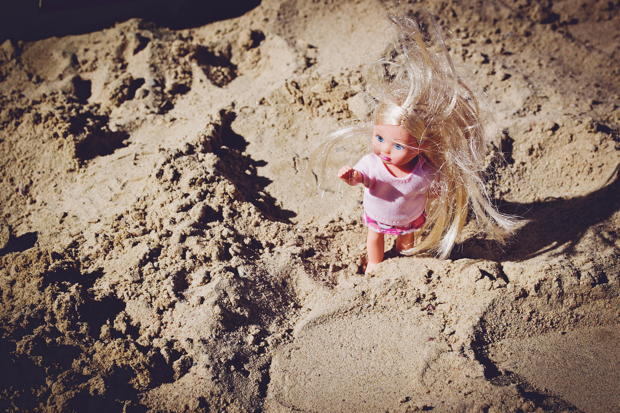 A friend of mine tells a story about one Christmas when she had been excitedly awaiting a new Kelly Doll, just like the ones advertised on television. When she opened the box, she discovered a doll, but not the one she was expecting. It was off-brand — close, but not the real thing. She was crushed. But even at age six she knew she needed to fight back her tears. The proper thing to express at this moment was gratitude. It was a gift after all.

I went through a season of life like that. From the time I finished college, through my twenties and thirties, what I wanted was a husband. What I got was advanced degrees. I remember just after graduating from seminary loading up several boxes of books into a U-Haul fighting back tears. The man I had seriously considered marrying and I were about to call it quits, by mutual decision. At age 31, after several previous disappointments in this area, this one was particularly crushing. At the same time, I was headed to a PhD program. What I realized ought to have been an exciting transition for me, especially considering the incredible privilege of higher education, only felt like a consolation prize. Certainly, husbands and higher education are not mutually exclusive (God forbid!). But for me, a nightmarish pattern had begun to emerge in my twenties. Each transition was accompanied by the loss of a significant relationship: just after college and before my first teaching job, leaving that teaching job to go to seminary, and now, leaving seminary to get a PhD. Although most of these good-byes were either my choice or mutual decisions, it didn’t make the disappointment any less painful.

So, as my almost-ex beau and I loaded the last box of my books into the U-Haul I had a feeling of dread. “Hope deferred makes the heart sick,” says Proverbs (13:12, NIV). I was heartsick. I didn’t know how much more deferred hope my heart could handle. Looking back, I wish I could console my 31-year-old self with some perspective — little did I know how young I was, what an adventure it could be to pursue a PhD. But how can we force ourselves to love the off-brand doll? The desire was there to stay.

Many of my desires were planted in me early. As a girl, I determined I would be an author, like Louisa May Alcott. As a young teenager, I planned to defy time and become the fifth Beatle (I would play the keys so Paul could focus on guitar). In high school, I dreamed of learning Ancient Greek so I could read the New Testament in its original language. I assumed, as most Gen-Xers raised by parents who married relatively young, that marriage and family would simply come along, too. So deeply embedded was this expectation in me, I didn’t even articulate it.

But, marriage and family didn’t come. And continued not to come. (Turns out being the fifth Beatle might have been an easier pursuit.) My thirties progressed, and the marks of singleness became more painful: showing up at parties solo while my friends carted their babies, wondering if I would have ever the chance to have children, filling out that tax form year after year (NO, I am still not married, filing jointly), surveying what seemed to be an increasingly scarce landscape of single men, amassing a repertoire of hilarious stories of first (and last) dates with men met online. It hurt. I had great friends, a supportive family, a stimulating vocation, so I worked hard at being grateful. But somehow, these felt like off-brand gifts. I wanted the Kelly Doll.

I told myself I ought to be concerned about bigger things. Global things. Real suffering. “Seek first the kingdom,” says Jesus. I criticized myself for pain that seemed myopically personal, and therefore, trivial. But, as I brought these judgments to prayer, I began to discover how seriously God takes desire. One of the stories that resonated with me was “weak-eyed” Leah’s, whose husband Jacob favors her sister Rachel. Through the oblique drama of the punning names of her first four sons, the narrative speaks of her desire to be loved. When she finally bears a son, she names him Reuben, which sounds like the phrase, “see, a son.” She declares, “surely my husband will love me now” (Gen. 29: 32). When her second son, Simeon, whose name sounds like “hear,” is born, she says, “because the LORD heard that I am not loved, he gave me this one too” (vs. 33). Upon the birth of her third son, Levi, whose name sounds like “attached”, Leah says, “Now at last my husband will become attached to me, because I have borne him three sons” (vs. 34). But, when her fourth son, Judah, whose name sounds like “praise,” is born, Leah says simply, “I will praise the LORD” (vs. 35). In the tragic abruptness of this story told through the names of her sons we might infer that something has changed about Leah — but it is not that her husband began to love her. In fact, as far as I can tell from Genesis, that never happens. But, there’s another story peeking through the cracks — a story about Leah and the LORD she comes to praise.

I can relate. While I couldn’t help but see the main story of my life as one in which the heroine gains letters after her name but loses relationships, I began to glimpse a different one. The one in which, at each heart-rending juncture, Jesus shows up. He didn’t fix my problem. Nor did he try to tell me I did not really want what I wanted. But, he brazenly gave me other gifts instead. Though at the time I treated them like “off-brand” gifts, I can see now that they were good gifts — just not gifts that I was expecting or even knew I wanted. One of the more surprising of these was a promise. One morning while I was brushing my teeth, lamenting another night alone, I heard him say, “soon enough.” The “soon” was encouraging. I wasn’t sure about the “enough.” It was typically Jesus. Clear and cryptic. Heartening and hard.

Another of these gifts, as I have mentioned, was the gift of study. While I was bemused (on good days) and angry (on bad days) by the gained degree/lost man pattern in my life, I did find true delight in satisfying the curiosity that had allured me since my high school wish to learn Ancient Greek. In fact, I got more far than I asked for — not only the gift of studying Greek, but also church history, hermeneutics, poetry, and other subjects I wouldn’t have foreseen. Sometimes (on good days) I reveled in the privilege of dedicated time to contemplate the mystery of the gospel, and to discover a vocation for teaching and writing.

Oddly, when I look back at those dreams I had in my childhood and youth, I see that I got almost everything I wanted — including the peculiar things. While I never became a Beatle, I did start playing piano on the worship team at my church (something that brought far more joy than my own most stirring rendition of “For No One” on the piano). Further, in the midst of my PhD program, I got to write a dissertation (not the Jo March-esque book I dreamed as a girl, but it’s a start). And more: the unvoiced, unknown dream of a deep trek into the mystery of God’s love — an adventure exceeding anything I could have asked or imagined. Yet, not one of these gifts took away the ache in my heart. It hurt — sometimes unbearably. I still wanted what I wanted.

I could, perhaps I should, end the story here. This is where many of us are stuck. But Jesus continues to surprise me.

Recently, I watch as a lanky, sandy-haired man loads a U-Haul full of my boxes of books; I have just finished my PhD. This time, I am moving to be with him, rather than saying good-bye. It is a risk — a terrifying one. The U-haul still incites dread. Yet, a few weeks later, before I even have a chance to unpack those boxes of books in my new apartment, we are engaged. I have just turned 39. It has been about sixteen years since that first disappointing break-up after college and about eight years since that “soon enough” Jesus promised. This might be a moment to be proper and say that marriage doesn’t light a candle to God’s blazing love. Undoubtedly that’s true. But, I must admit, it feels good to get what I’ve wanted for all these years. If “hope deferred makes the heart sick,” then truly, as the Proverb continues, “a longing fulfilled is a tree of life.” So it is.

And it is also true that the pain of unmet desire is real. I sometimes ask myself, what if it hadn’t worked out? Would I, like Leah, upon receiving my third advanced degree and yet another break-up, finally have said, “Now I will praise the LORD”? I don’t know. Perhaps most of us have experienced a season of feeling locked into what seems like an interminable Holy Saturday, in which the “soon” isn’t “soon enough.” Even in the joy of a longing fulfilled, I recognize that what lurked at the roots of all that anguish should not have been. I still grieve sometimes. And as I continue to bring that grief to prayer, I remember Leah’s story. Leah’s pain and longing are part of a much longer arc of joy and fulfillment. I begin to wonder if her declaration of praise upon Judah’s birth is cannier than I first thought. After all, it would be from her line, not beloved Rachel’s, that the Messiah — the Lion of Judah — would come, the Messiah who would ultimately wipe away every tear. In this light, I see how the Lion of Judah descended into the darkness with me. He was fighting for me all the time, for my truest desire — the Desire under all the others. I see that I while I wanted the Kelly Doll, I also want much, much more. Desire, like a pulley, draws me upward.

Danielle Davey Stulac lives in Durham, NC with her husband, Daniel, and daughter, Abigail, and is part of Blacknall Presbyterian Church. She is Program Director for the Theology, Medicine, and Culture Initiative at Duke Divinity School, and Adjunct Professor of English at California Baptist University Online.

In Focus
By Andrea Bridges
Beginning Well: A Series for a New Year

Take a dip into some of our finest articles on topics that will inspire you as you begin your new academic year.

With honesty about the struggle, Tish Harrison Warren offers her field notes from her first stretch of motherhood.