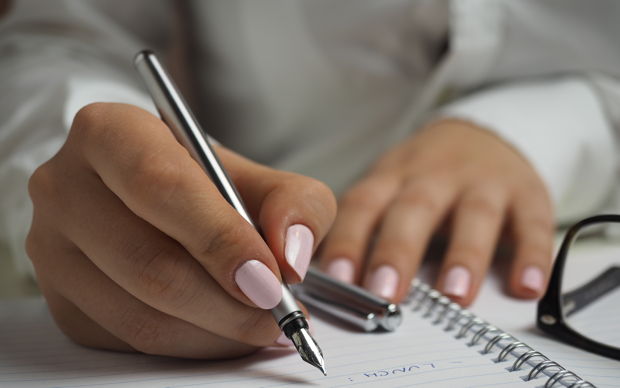 Two years ago, a close girlfriend of mine urged me to draw up a list of the “non-negotiables” I was looking for in a marriage partner. It wasn’t the first time I’d created this list, though the list my 11-year-old self wrote probably included things like: “Must be a Star Wars fan” or “Must do his own dishes.” The (supposedly) more mature version of me drafted a ten-item list on the train to downtown Manhattan. I scrunched my face in concentration as I pieced together the image of my ideal man.

I had never been in a relationship before, had never been on a date. It wasn’t out of lack of trying — I had been interested in guys throughout high school and college, but no real prospects materialized. In college, I clung to the idea of a rosy epic romance to the point where my legitimate desire for the intimacy of a relationship obscured my ability to recognize God’s goodness already at work in my life (I coined the phrase “guydolatry” out of that experience). Now I was a twenty-something graduate student bent on pursuing this desire but with God at the center, and after much prayer and counsel from mentors, I sensed God opening the door to my dating life for the first time and giving me the go-ahead to try online dating. I leaped.

So I found myself on the train, mentally drafting a list of attributes I wanted this future husband to embody. Loves Jesus? Check. Funny? Check. Adventurous spirit? Check. Cares about social justice — including racial issues?

The last one gave me pause. My reflexive response? CHECK! Of course I want this! I could hardly conceive of being with a guy who didn’t value the things that hold so much weight in my life. But the unexpected anxiety roused by this idea challenged me to parse out what I meant by “Cares about social justice.” Did it mean that I wanted him to post progressive articles on Facebook and vote Democrat? Did I want him on the streets protesting with me? Or did it boil down to this: Did I need him to be woke?

Life, Love, and Being Woke

I identify as a Black and Latina woman with Asian heritage, so I was all too familiar with the charge to“wokeness” that emerged with the Black Lives Matter movement and other recent efforts aimed at challenging racial injustice. In these circles, being “woke” signifies that you are aware and educated about the oppressive realities at work around you — especially in regards to racism. Admonitions to #staywoke can be worn as a badge of honor, a symbol that you are connected to communities of color and aligned with their struggles. The posture also gauges whether you have found someone who is in the struggle with you or not.

As a woman of color pursuing a Master’s degree in Social Work and heartsick over racial suffering, what were the implications of being #woke for my dating life?

One realization surfaced as I navigated online dating apps: there were patterns in who was giving me attention. I received far more messages from guys on free sites than on the pricey sites marketed as higher quality. Scanning my matches on the free sites like the researcher I am, I saw a site populated by men of color. When I compared these matches to the profiles on paid sites, the contrast was stark: The men on the paid site were not only predominately white, but also more educated and of higher socioeconomic status.

The disparity between the two dating pools recalled the Black Woman Matrix concept outlined to me by my college sociology professor. He pointed to the statistical research that suggests the more education a black woman acquires, the more her chances of marrying a man with a similar education level decrease. This is not the case for all black women, and many have amazing experiences with dating — online or otherwise — but as a woman on track for an advanced degree and considering a PhD someday, I considered the theory with fresh eyes.

Surveying my list of non-negotiables again, I found myself stuck in what seemed like a lose-lose scenario. I was drawn to the more educated (white) men because they appealed to my desire for intellectual verve — for a philosophical kindred spirit. But when I reached out to them and read the summaries of what they were passionate about, what they valued, not only did I receive no response, but I noticed one blatant absence: they didn’t talk about race.

I could talk race with the men of color on the free sites. I could count on them to be in the know about the hurts affecting our communities. We read the same books by black writers, listened to the same podcasts, and they didn’t shrink away when I told them how weary I was of being the token minority in predominantly white spaces. But then our conversations hit a wall when we talked about anything outside of race and favorite childhood TV shows. Frustration set in — and guilt.

I thought then that I needed to make a choice. I could find a guy who shared my intellectual curiosity but avoided conversations about race or enjoyed the comfort of colorblindness — oblivious to the advantages of white privilege. On the other hand, I could be with a man of color, settle into the security of someone I didn’t have to explain myself to but who couldn’t provide the depth of conversation that I craved. Of course I knew that another kind of guy existed, a guy in which both of these qualities blended seamlessly — but he didn’t exist in my datingscape. So I agonized over whether these tensions meant I was classicist, in the totally wrong environment, or just acting out of internalized racism. Maybe it was all of these and more.

I thought about scrapping my non-negotiable list altogether because clearly there was no way to reconcile what I wanted with the guys actually out there.

Two years of stumbling through first dates, wandering through desert periods with no prospects, and crying many confused tears has found me still wrestling with the same tensions. But instead of feeling hopelessly destabilized by them, I have experienced God bringing me hope and perspective through my friendships — both with marrieds and singles. Investing in these relationships has been one of the healthiest decisions of my single adulthood. Not only have they taught me to value the intimacy God gifts me with through his presence and the people he has strategically positioned in my life, but their insights constantly remind me that my ultimate goal is to seek Jesus — not wokeness.

In spending time with my Savior, I slowly awaken to the things that burden his heart and join him in his efforts to reconcile people to himself and to each other. With patience, with grace, Jesus is forming me into the kind of person who cares about racism, who cares about how all forms of injustice compromise the dignity of people created in God’s image.

When I absorb this truth, I no longer feel self-conscious about my desire for a marriage partner who will not resist grief or withdraw when I weep over another black child shot by a police officer. I no longer rationalize my need for someone willing to unpack race with me, who can empathize with and engage the struggles of my ethnic and racial communities — whether he is of those backgrounds or not. And I’ve realized this too: I don’t need a man who’s woke — at least not in the way I once defined it.

My non-negotiables don’t lie in my partner being an expert on critical race theory or a man of color with the same experiences as me. I don’t expect him to be this paradigm of racial awareness, and neither do I compromise the yearning for intellectual engagement and depth. Instead, I pray for a man whose heart and intellect is positioned towards God and towards the people he loves — especially those suffering from injustice. This is the type of man needed in a time when Christians are too often framed as passive and slow to answer the cries for racial justice in our land.

I am not woke but waking, committed to the arduous and messy lifetime process of working through the realities of the broken world God is redeeming. I haven’t reached this pinnacle of awareness; I’m still getting educated about the nature of my racial pain and others’ stories — and how to respond to them. But as I wake and change and act in love, I pray for a partner to wake with me.

An always-eager scholar, writer, and self-proclaimed nerd, Joanna Chin received her MSW at New York University and her B.A. in Interdisciplinary Studies at Wheaton College.