My Quilted Calling: Sewing Together the Scraps of My Story 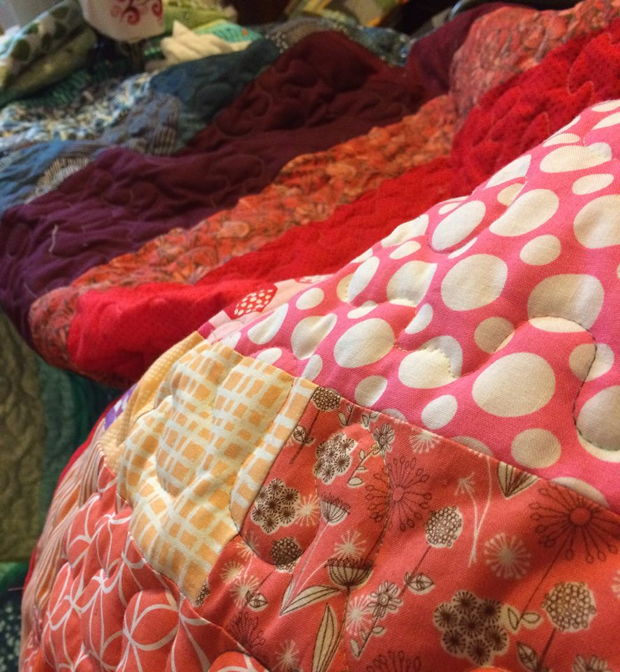 I don’t usually remember titles, but it’s been more than two years since I read The Seamless Calling of Karen Swallow Prior, and the words still stick with me.

Reading about Karen Swallow Prior’s lifelong love of literature and her subsequent career as an English professor and writer filled me with admiration — and also despair. For when I was in graduate school, I imagined a seamless trajectory for my own career: one opportunity would lead to another, and in forty years I would look back on my life and be able to trace the clear threads of God’s leading over the years. But that is not how life has turned out.

It has been twenty years now since I started law school, passionate about advocating for justice, particularly for women and children. By the time I graduated though, I’d become somewhat disillusioned with law, primarily because it would mean working with lawyers, whose characters I’d come to distrust after reading tomes of case law. Perhaps it was just too idealistic to think I could make a difference for justice — I have been called naïve before. I accepted an internship, and then a job, with a high-profile marketing company: an unexpected shift in my calling right off the bat.

In that first year out of grad school, I learned something else about career: sometimes our decisions have less to do with our capabilities or opportunities than with affairs of our hearts. I parted ways with the man I thought I’d marry, and all of a sudden the landscape changed. I’d spent every Easter for five years with his family, and suddenly finding myself alone for that holiday, I signed up last minute for a Young Adults weekend retreat.

A friend introduced me there to a pastor and professor at a local seminary who put a worm in my ear about pursuing full-time theological education with a view towards vocational ministry. I was offended by the conversation (was he saying I couldn’t serve God in the workplace?), and I dismissed the suggestion quickly. Two weeks later though, I had to bite my tongue when my own pastor sat me down and suggested the exact same thing.

I had zero desire to go back to graduate school and even less to think about vocational ministry, but with my heart at ground zero in the aftermath of the breakup, I begrudgingly told God I’d look into it.

I went reluctantly to visit one, and then two, campuses. A few months later I visited two more in Australia, and by the end of that year I found my desires had shifted. I enrolled in a one-year program, with a threat in my heart: Just one year, y’hear God? And then I’m going back to be a Christian in the workplace, where the real grit of discipleship happens.

One year at seminary turned to two, and then three — with me protesting all the while that I didn’t want to go into full-time ministry. By the time I’d graduated, however, God had surprised me once again: the head of our denomination had created a new position in church ministry for me. I was tasked with developing a model of women’s ministry that would disciple women in the workplace. My brief was to reach beyond the women’s ministry that seemed to cater to stay-at-home moms and retirees that I’d seen before, and I was excited.

My launch into law, and then marketing, having been false starts, I imagined a long, new trajectory in vocational women’s ministry. The weaving of the seamless garment would begin now, I thought.

But no. Of course not. Because less than a month into my new job, a guy turned up on my doorstep with the worst pick-up line ever, and while I didn’t sense any chemistry between us at the time, we found ourselves engaged within six months and married a year later, while he looked into pursuing a PhD overseas. And so I quit my job and moved overseas to be a graduate student spouse and fill my time with God knows what. It was another move, another career abandoned, yet another loose thread in my story.

Our arrival in the US just happened to coincide with our new church just happening to need some help with mentoring women in their college ministry. With no work permit and a whole lot of time on my hands, I volunteered. Ironically, I was the only person besides the senior pastor on the church staff of ten who had a seminary degree. Yet I was doing an unpaid internship like I’d done ten years before as an undergrad. I was grateful for something to do, and I loved working with those college students. Still, the thought occasionally bothered me: Really? You have two graduate degrees and you earn zero dollars and your title is “intern”? I had so much to learn about working as for the Lord, and not for human accolade (Colossians 3:23-24).

The internship turned into a full-time (and paid) position in college ministry, which I kept until, once again, family relationships swayed my course. I handed over my responsibilities a few months after our first child was born and then stayed at home as we welcomed a second, and then a third, into our fold.

If you had told my sixteen-year-old self that in twenty years’ time she would be a stay-at-home-mom to three small kids, driving a minivan and living in suburbia on the other side of the world, she would have scoffed at you. She had dreams. She had plans. She was going to Make A Difference for Justice in this world. She had scholarships, and an unwavering confidence that her own seamless calling was about to commence.

Not one of that girl’s plans had come to fruition, and I was stunned to find myself grieving for her in my late thirties. My law degree had gone nowhere, and I felt like I’d been forced into early retirement from ministry. I’d been removed from the realm of Making a Difference and relegated to the Trenches of Motherhood, where the days seemed to consist mostly of holding back the constant chaos of children: an opposer of domestic entropy.

Without adults to talk to during the day, I started a blog: writing to virtual adults about faith, family, and other topics I cared about. I had no ambition to be a Writer, or to try and make something of the tatters of my career goals; I was just processing out loud. But as I sat typing in my pajamas among the mounds of cheerios, something strange seemed to be happening: people were reading and responding, and it began to feel strangely like ministry. Perhaps I wasn’t retired after all? I kept writing.

A few months later, I learned of an opportunity to partner with International Justice Mission in the launch of a new project. They were looking for faith-based bloggers who cared about justice, and applications were due that same day. I filled in that thing so fast I could hardly breathe. I clicked submit before even re-reading my words for typos, with a motivational paragraph that was a thinly disguised plea: Please. Choose me. I’ve been waiting all my life to make a difference for justice and didn’t feel I had a chance. Please. Please, choose me.

Two days later I got an email inviting me to join their launch team, and I cried so hard I could hardly get the words out to tell my husband about it. He was confused: why was I so emotional about promoting somebody else’s book for free? Surely I was the one doing them the favor?

But what had shifted that day was my perspective. That one opportunity gave me the briefest glimpse of God’s perspective. My life may not have had a seamless trajectory, but it was far from being a collection of scraps and loose threads.

The most random and crazy collection of fabrics can be arranged and stitched into the most gorgeous and unexpected of quilts. With my un-crafty and untrained eye, I had not been able to see any possible use for the miscellaneous scraps of my life story, but that one invitation began to sew some of the themes together: justice, law, a mother’s heart, a platform for writing. The quilt was far from complete, but there was a thrill in seeing something of a pattern. The sixteen-year-old in me had not been a naïve fool, and my passion for justice not just a quixotic ideal.

God is at work to weave together the unexpected and interrupted portions of my story. The finished pattern isn’t clear yet, but I know one day when I look back, God will have made something beautiful of the swatches. Mine is a quilted calling, and God is sewing it with redemptive threads.

Join us for this conversation with writer Kaitlyn Schiess as we discuss her journeys around political thought, spiritual formation, and life as a graduate student in new place.

No matter what your political leanings, it’s a complicated time in the United States. There’s no debating the fact that roughly half (or more) of the country will be sorely disappointed when they awake on the morning of November 9...