When I composed and performed “The Annunciation” for a gathering of Christian women scholars in 2007, I had hoped to voice the struggle of academic labor and loss and depict the complex lives of women who are called to scholastic work. I wanted to give women scholars theatrical affirmation that their stories were worth telling. I didn’t realize at the time that I would, one day, join their number.

“The Annunciation” begins with a woman knitting in an art gallery, avoiding work on her dissertation.  She is stuck in the middle of Chapter Three — and this past summer, so was I.  Like the character I had written six years before, the joy had gone out of my writing and many of my day-to-day interactions.  The work seemed unyielding,and I was tired. I was lucky that a dear friend had made me promise to not take up knitting before I ever started my doctoral work!  She had read “The Annunciation,” too.  The connections between life and art were clear enough that my mother called to ask if I thought the piece itself was to blame — a kind of self-fulfilling prophesy. But I think my mother had it wrong.  For me, during that difficult passage, the piece became a kind of self-fulfilling promise: a promise that God was present in my season of shadow. It became a trail of bread crumbs, dropped by Providence years before, pointing me toward home. 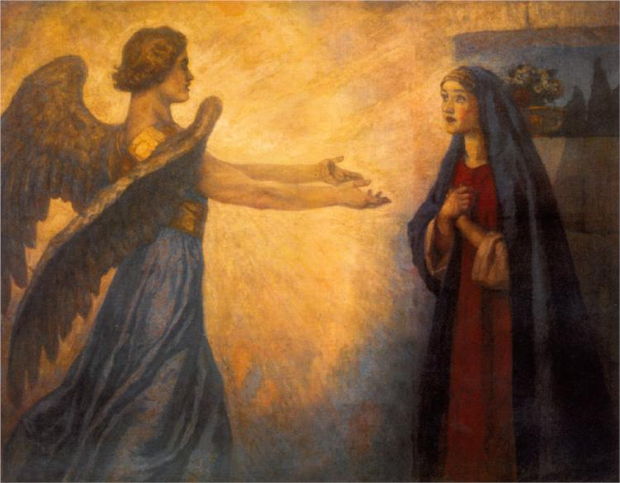 Advent is its own season of shadow, both in the sense of lengthening days and in our memory of a sister “overshadowed” by promise and power. “The power of the Most High will overshadow you,” Gabriel tells Mary (Luke 1:35). And we wonder what such dark promises mean for her — and for us.  The verb, in this case, is the same verb that Luke uses to describe the overshadowing cloud of the Transfiguration (Luke 9:34). It is a cloud that initially frightens the disciples, but then brings Jesus’ identity into clarity and focus. One might say the same for Mary. For her, the shadow of God’s Spirit means risk, mystery, and a vocational call that others interpret with scorn. It means that she will endure long months of physical discomfort and in the end will have no proof — save that of her testimony — that the child in her arms is the Son of God. It means that she herself will bear a new identity and name: the handmaid of the Lord. In other words, she will not only give birth; she will be born again.

During those difficult months, I found grace in the shadows of my own inadequacy, my own imperfect risks, and my own lack of proof surrounding the validity of my vocational call. I found the identity of Jesus brought into focus and brought near. I didn’t stand on a mountaintop; I sat in a cluttered office.  But the Shadow of God’s presence was there. And slowly, painfully, I chose to make Mary’s words my own. May you stand with her under the Shadow of the Spirit this Advent season and may her words be yours: “Let it be with me according to your word.” (Luke 1:38)

“The Annunciation” can be found in Blessed: Monologues for Mary, a collection of contemporary, dramatic monologues growing out of engagement with the biblical texts surrounding Mary, the mother of Jesus. Discussion questions for use with small groups are included.
Tags:
graduate school | calling & vocation | advent | teaching

Carmen Imes offers a prayer to consider before embarking on a day of scholarship and work.