Caroline expresses our struggle with identity, figuring out how to be authentically South Asian and Christian simultaneously. In Caroline’s quest to integrate both parts of herself, identifying places of tension and finding healing has affirmed the fullness of her identity. 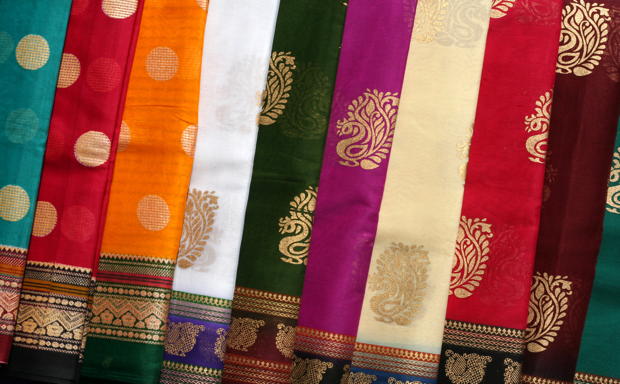 Moving from the United States to Singapore, I marveled at the pretty lights strung all over the city for Deepavali, welcomed the hongbaos for Chinese New Year, and most of all, savored the food. I learned to weave in and out of the various cultures that make the country beautiful and unique. My Indian friends invited me to various religious celebrations and parties, and I loved any opportunity to dance and dress up. These invitations were always met with some disapproval from my Malayalee Christian parents. My teenage eyes only saw the opportunity to have fun with friends; my parents were hesitant about my participation in religious celebrations. While I adopted my parents' Christian faith as my own, I figured that as long as I wasn't making eye contact with the god in the corner, I was fine. In retrospect, my frustration at my parents' response was more than typical teenage angst — I felt the friction between what I knew to be cultural and religious.

If my faith disqualified me from participating in these cultural celebrations with religious overtones, what did that mean? What was left that was distinctly cultural, that confirmed for me that I was Indian? I want to know if my ethnicity and my faith can truly coexist in one body, without one eroding the other.

The summer before college, my faith and ethnic identity collided in an unexpected way. I had two months before starting school at the University of California, San Diego — the same school that my older brother and sister were attending. I knew it would be tricky to continue partying under their watchful eyes, so I decided to get everything out of my system that summer, then start acting like a good Christian in college. My logic was impeccable, and my family would be none-the-wiser.

God interrupted those plans when my family forced me to attend an Indian Christian conference in Oklahoma. Reluctant and annoyed, I shuffled into the main session and felt my face flush with embarrassment. The room was filled with thousands of beautiful Indian people all dressed in their best Indian outfits. Here I was, awkwardly rolling up in my American Eagle skirt, polo shirt, and jean jacket. (Yes, I remember my outfit, and yes, it was cool at the time.) I had never felt so strongly that I didn’t belong. This experience unearthed the chronic pain that flares up during poignant moments in my identity journey — that gnawing lie that I was never and will never be Indian enough.

Sitting at this conference, feeling alone and insecure, I couldn’t drown out the feeling that I would never be accepted by my own people. My Indian identity was never challenged because I was rarely in predominantly Indian spaces.

The identity markers that comprised my understanding of what it meant to be Indian were largely external or superficial: speaking an Indian language fluently, eating and cooking certain foods, knowing Bollywood actors and actresses by name, having certain clothes, and participating in cultural celebrations. According to these standards, I would never be enough.

But it was in this very space that God met me in a powerful way. I came undone. All these years I was deliberately running away from God, and yet he chose to protect me. In that moment, my cerebral, bumper-sticker understanding of “Jesus loves me” shattered and gave way to a deep, visceral, life-infusing reality that I am loved and seen and known by a holy God. I am loved and seen and known even in the midst of not knowing who I was. God met me in my struggle with ethnic identity. Two aspects of my life — my faith and my ethnicity — came together that day in Jesus. God’s love began a journey of healing over the lie of “enough-ness.”

I’ve recognized how deeply-rooted the lie of “enough-ness” was in so many aspects of my life. One unexpected space of pain and healing was found in my interracial relationship with my now-husband.

Dating is not a word that has positive associations in the Indian community. "Talking" is much more acceptable. "Talking" can be innocuous. "Talking" implies that no commitments have been made, that attraction and intimacy don’t exist. One is simply exploring a possibility that parents can shut down at any given time.

When Mason and I first started "talking," I was determined to do the not-so-Indian thing: tell my parents the truth. I had hidden so much from them as a rebellious teenager, but after God changed my life, I wanted to be honest and open. Conveniently, my parents were still in Singapore at the time, so I told them the truth over email and didn't have to see or hear their immediate reactions.

As the youngest of three children, whose older siblings were not yet married, my news came as a shock on multiple levels. I was jumping the line: unheard of. I found someone for myself, rather than letting my parents do their job of semi-arranging my marriage: unheard of. If those two points weren't enough, the boy I was interested in was white: confusion. The only reason that my parents didn't immediately shut down our relationship was because Mason deeply loved Jesus.

After ignoring our relationship for about half a year, hoping it was just a phase, they came around. Through many awkward dinners and countless hours of prayer, Mason and I got engaged. That was the day that Mason went from being my "special friend" to their son. And in true Indian parent revisionist history, my parents now have no recollection of ever showing resistance to our relationship. Their love for Mason is so evident that my siblings stopped arguing about who was the favorite child in the family. Clearly, it was Mason.

My relationship with Mason brought up identity questions and made me grapple with the reality of my life looking different than I expected. Marrying a Malayalee Christian was the expectation, and I never questioned or disagreed with it. What did it say about me as an Indian woman that I wasn’t with an Indian guy? The aches of “enough-ness” crept in.

And here was Mason. His listening ear, humility, love for Jesus, and amusement at my craziness all caught my attention. Even as it became clearer that this relationship could be something from the Lord, I felt that familiar pain flare up as I processed a lie that felt too real: marrying a white man made me less Indian.

I was looking for affirmation of my identity in relationships, but I was meant to find it in Christ.

Through the years, the more I recognized and embraced who God has made me to be, in all of its uniqueness and complexity, the more those false identity standards began to crumble.

Instead of measuring myself by external markers of South Asianness, I am discovering how much of my culture I carry internally and intuitively; it is the air I breathe. I cannot help but be South Asian. As a follower of Jesus, I cannot help but be Christian. God affirms the Indian-American, third-culture-kid, loud, silly, creative, and prophetic woman he fearfully and wonderfully made.

The truth and affirmation of who God says I am now rings louder than the lies of the enemy that tell me I’ll never be enough. My faith and my ethnicity aren’t two opposing aspects of my life that erode one another. Instead, I experience joy and freedom as I embrace the intersectionality and live in the fullness of who God has made me to be.

Caroline Lancaster serves as InterVarsity’s Associate Director for Multiethnic Initiatives. She is a second-generation South Asian American that has lived in California, Singapore, Boston, and most recently, outside of Chicago. She left a career in marketing and design to become a campus minister with InterVarsity at Boston University. Caroline is a certified Cultural Intelligence Trainer and participated in Rev. Dr. Brenda-Salter McNeil’s Reconciliation Leaders Cohort. She has been married to her wonderful husband for nine years, and is a mother to two boys.