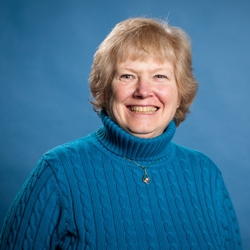 This week many in the InterVarsity community are grieving the loss of our friend and colleague, Jay Sivits, who left us for her heavenly home on Sunday morning, February 3. For those of us on the Women in the Academy and Professions team, Jay holds a special spot in our hearts because of her ongoing advocacy and love for women in the academic space. In fact, Jay played a critical role in getting WAP started in the first place.

We reached out to Sara Scheunemann, former InterVarsity colleague of Jay’s, and asked a bit about the origins of WAP:

“Many years ago now, I had the great privilege of serving alongside Jay Sivits on InterVarsity's Graduate and Faculty Ministries leadership team. Many of us in GFM saw the gifts, needs, and challenges of women called to the academy and professions and wanted to do something more to help them flourish. Jay and I were tasked with dreaming up what that "something more" might be, and Women in the Academy and Professions was born out of our conversation around a lunch table at InterVarsity's National Service Center. What I remember best about that conversation was how simple and easy it was, a sign for us both that it was the Spirit who was truly giving birth to this new endeavor. We began with a name for the ministry, much prayer, a survey to see what would be most helpful to women, and faith that God would take it from there. What we see now in WAP is one example (of many!) of Jay's quiet and prayerful creativity bearing fruit.”

WAP founder Sharon Gartland reflects on Jay’s influence on the development of this ministry:

“Jay had been a dear friend and also my Spiritual Director of many years. She recognized my heart for women and the grief I regularly felt at the Church’s complicated history with female believers. On a day I remember clearly, she invited me to apply to be the founding director of Women in the Academy and Professions. This was a shift from my previous roles in the health care world and in academia. She was prayerfully inviting me to take my frustration and grief and channel it into ways to bless the many brilliant and gifted women out there on campuses and beyond. It was typical of Jay that she would see the possibility of how God might redeem something painful and turn it into something good.

“Jay was my boss and close advisor for the next seven years as we began to flesh out what this new ministry would look like. Her steadfast commitment to prayer and her unwavering belief in God’s deep longing to see women flourish in all spheres of the world helped to anchor me throughout my time in this role. True to her personality, she did not need to be the obvious leader or even receive the recognition for what this new thing became, but would sit quietly beaming at me and our team whenever we spoke at meetings or offered new ministry programs. Her humility, wisdom, and prayerfulness as my supervisor continue to inspire and shape me in my leadership roles today. She would describe herself as an “influencer” and she offered her godly input in many ways. The most significant example of this was her commitment to praying about everything, constantly. Her unflappable spirit and gracious love towards others served as an example to me and others of quiet strength.”

Over the years, Jay supported WAP in numerous ways — writing for us at The Well, advocating for us in conversations “at the top,” giving counsel, and interceding for us. Jay was on my prayer team, receiving regular updates about WAP’s work and ministry along with specific prayer concerns. Whenever I saw her in person and would mention some situation and ask her to pray, Jay would remind me that she’d already been praying and would continue to do so. Last spring, we were together in meetings and I gave a brief report about the work of WAP. She pulled me aside later to say how deeply moved she was and how much it meant to her to hear about the ways we are engaging with and serving women graduate students and faculty.

There is a lot we will miss about Jay — her warmth and caring disposition. Her sense of humor. Her strength of presence. As one colleague commented, “Some of my strongest memories of Jay have to do with her sitting through an entire meeting without speaking and then at the very end saying the wisest and most profound bombshell insight of the day. No one else listened long and carefully enough or possessed the wisdom.”

Jay’s knowledge of and love for God were evident in everything she did, as well as her desire to take others there with her. One of the best ways we can think to remember and honor her is to point you toward prayer — and so we share with you this prayer guide she published at The Well several years ago. We know her desire was that we would use it as a resource to deepen our own love for God with whom she now engages face to face.

Karen Hice Guzmán is the Director of Women Scholars and Professionals. Except for some years taken off to raise children, Karen has spent her adult life in and around InterVarsity. She loves to use her gifts of hospitality and teaching to create a welcome place to connect with God and one another. Karen has a BS in Horticulture from Michigan State University and lives in Marietta, Georgia. She and her husband have three adult sons and a daughter-in-law. She loves dark chocolate, good coffee, and British TV.

Reflections
By Ann Boyd
On Peacemaking

Ann Boyd reflects on the calling we have to be peacemakers in the midst of our divisive culture.

What does it look like to share your Thanksgiving with an eclectic group of students and friends ... every year? Karen Guzmán shares her story and her best tips.