(with thanks to Noreen and Elizabeth J)

Where does this story begin? The seed goes back ten years when we first packed up all our belongings, put them into a sea container, and moved to Morocco. This container was lost for several months, and we feared all our books were gone along with everything else. Noreen, an almost-blind Scottish woman here, heard the news and a few days later shared that God told her to give us her books to make up for our loss. (Either God or she knew that "God told me" was the only way we wouldn't argue over her generosity.) She immediately arranged to have three bookshelves and their contents moved out of her house to ours. And what a banquet she gave. I have been feasting off of Noreen’s books for years, long after our container was found and all our books delivered. 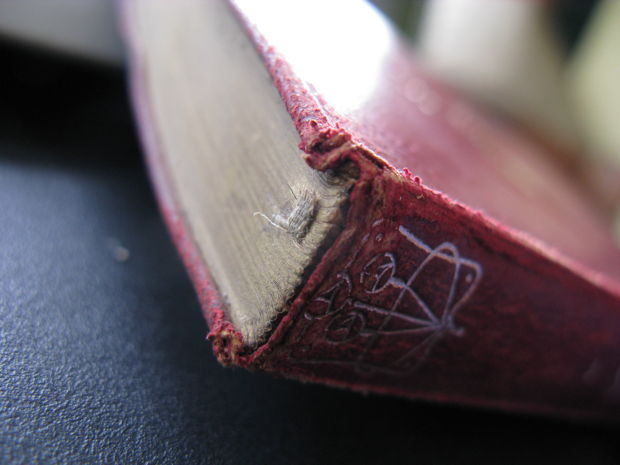 Among the books are two shelves of gorgeous leather-bound volumes with letter-press printing. Maybe you can’t judge a book by its cover but you certainly can love a book by its cover. Sometimes when people come into our library room, they are immediately drawn to these shelves, and they’ll take out a small volume just to touch it and admire its beauty, just as I often do. I always get a secondary pleasure watching someone else appreciate the treasures Noreen passed on to us.
The other night, Elizabeth J. stopped by. She’s a book lover too and she spent a few minutes by the shelves. She pulled out a volume of Keats, a little red leather book with gold gilding on the top, and admired it. I smiled. Then she asked if she could borrow it. I gulped inside. My precious book? I hesitated, I waffled. Then I said “Wellllll….” She got the hint, and Keats stayed safely on the shelf.
This morning, in a rather roundabout way, God pointed out to me that I was wrong not to lend the book. I knew that, of course, but I had been trying to pretend otherwise. I went to the shelf and took out the Keats so I could bring it to church and give it to Elizabeth. I don’t think I had ever looked at the book before and I noticed it was a little worse for wear. The binding was scuffed. The ribbon marker was disintegrating into a fragile collection of unwoven thread. There were discolored spots on some of the pages. But it was still a beautiful book.
I glanced through the table of contents to see if there were any poems that struck my fancy. I don’t know much about Keats. Off the top of my head the only thing I knew he had written was “Ode to a Grecian Urn.”
I glanced through the table of contents, skipping quickly over titles like “Hymn to Pan” and “Endymion’s First Vision of Dian.” I turned the page, went past “Ode to Psyche,” and saw “On Leaving some Friends at an Early Hour.” That sounded interesting to me. I opened up the book and flipped through to page 148.
But first I came to “Escape from the City” on page 147, and I stopped to read it. When I turned the page I found “On the Grasshopper and the Cricket.” Hmmm. Then I noticed this was on page 150.  I was saddened at the thought there were missing pages in such a beautiful book, though I could imagine that would be easy to do. I envisioned a rather Dickensian print shop with a Bob Cratchit character in a printer’s apron who was having a bad day at the folding machine. But intuitively something didn’t seem right about how those pages could be missing and I checked again.
That’s when I discovered the uncut pages.
Books are printed on sheets of paper. Take a sheet of paper, fold it three times. Unfold it and you’ll see eight blocks. Print on both sides of the paper and you’ll have sixteen blocks. Fold it up again. Stack it with some other folded sheets. Take scissors to cut the edges off so you’ll be able to turn over the pages. If you did a nice job folding and stacking, you can trim the pages with one snip of the scissors. If you didn’t, you’ll cut some but not all.
The folded sheet for pages 147-150 had never been trimmed, being a little narrower than the sheets on either side. 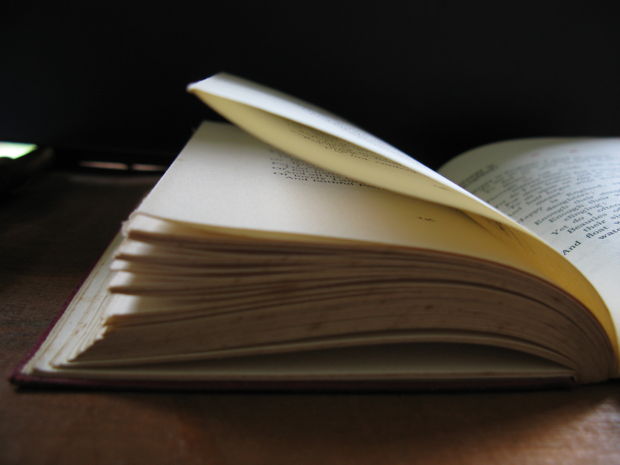 This edition of Keats’ poetry was published in 1906. For over one hundred years it has sat on one shelf or another and no one has ever tried to read “On Leaving some Friends.” It feels tragic in some way to have a beautiful poem in a beautiful book go untouched and unread for a century.
Unlent books, unread poems, uncut pages. This is something I’ve been thinking about lately. Am I open and generous with everything that has been given to me, all my talents, possessions, and resources? Or do I conceal them out of fear or greed? I wonder what poems have been written by the Author of my life and printed on my heart, but have remained safely hidden away because I’ve never let the pages be cut.
My life is intended to be taken off the shelf, opened, read, enjoyed. I’m meant to reflect God’s glory with an unveiled face. (II Corinthians 3:18)
The lamp goes on the table.
The salt goes in the stew.
The talents are invested rather than buried in the ground.
The uncut pages are sliced with a razor and finally see the light of day. 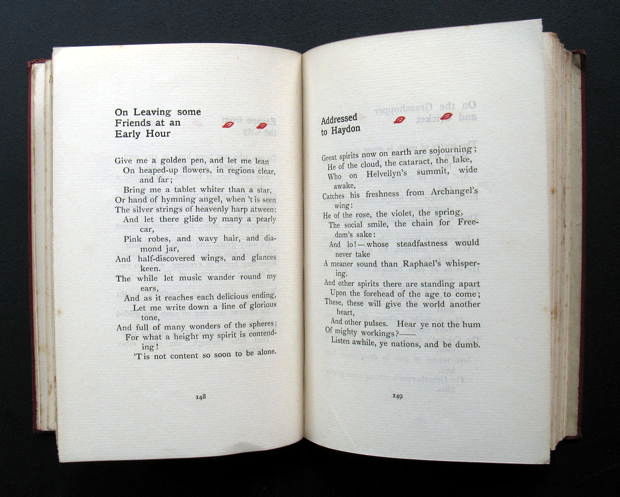