In Which I Turn Forty 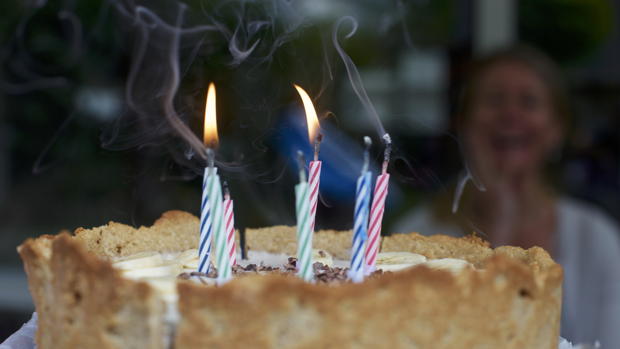 This past birthday was one of the milestone years for me. The last time I had hit this sort of celebratory milestone my husband David and I were living in London and he threw me a surprise party at our favorite gastropub. It was all very British and hipster and lovely. A decade later and I’m once again on the threshold of a new decade, this time in suburban Michigan with a slew of wrinkles, grey hairs that multiply daily and three kids under nine that have contributed quite a bit to the latter. Nothing is hipster about being woken up around 6:00 a.m. on your big day to screams of "family bed!" as three not-so-little anymore bodies are thrown upon you. You shed tears of gratitude for the smell of coffee and toast. But my husband managed to pull off another birthday surprise: this time a mini-holiday to the shores of Lake Michigan. With floaties, body boards, and Scrabble Junior in tow because currently no birthday celebration is complete without family game night. And honestly it was all exactly what I wanted. And yet.

Self-reflection is important to me, and part of entering a new decade is taking stock of all that has occurred (the three children, the house with the yard, the business established) and all that has not (the published book, the once-full passport that has gathered dust). If I focus on the latter part, it threatens to undo me with a force that it hits at my core. But I knew that I couldn’t enter this decade meditating on all that was not. So leading up to my big day, I began focusing on my inner monologue and changing how I spoke to myself.

I had realized over the course of this past year that my default pattern is negative self-talk. It can range from the innocuous cocktail party self-deprecation patter:"Oh this old dress? I never find anything that looks good on me and this looked halfway decent" to wryly responding to my kids saying I love you: "well, it’s only because I buy all the treats around here." It starts off small but negative self-talk has a way becoming rooted into our inner linguistic pathways. At first I became cognizant of it with my interaction with social media. LinkedIn, Twitter, Instagram can all be wonderful tools to share information and make connections but the comparison monster can rear its ugly head pretty quickly. And I’m a big believer in community over competition, so while I didn’t begrudge anyone else their personal or professional success, it began to creep into my mind that I myself hadn’t accomplished enough. That I was rather inadequate it turns out, and could have done more or could be doing more. That perhaps certains decisions hadn’t been the right ones. And with that spiral of doubt came the rabbit hole of negative self-talk. All the little ways I had been talking to myself over the years just snowballed into a larger mental picture of overarching negativity. It got to the point where my husband was constantly (and gently) calling me out on it and so I started doing a bit of research on reframing the internal monologue and the saving grace has been the concept of neuroplasticity.

Forgive me for summarizing years of complex neurological and psychological research, but essentially neuroplasticity is the process of changing brain mapping by forming new neural connections, often through changes in behavior. It is both a blessing and a curse: neuroplasticity is what can lead us into bouts of depressed thinking, but it also means that the brain is able to rewire itself and move into patterns of positive mental health. This is a huge revelation because rather than staying stuck in that fixed mindset of "always" and "never," I realized that I could move into the freedom of what is now known in many psychological circles as the "growth mindset" of possibility and learning. As Bradley Busch wrote in The Guardian:

...research suggests having a growth mindset has other advantages, including coping better with transition, higher self-regulation, grit and pro-social behaviours. There is also evidence suggesting mental health benefits — those with a growth mindset have been found to be less aggressive, with higher self-esteem and fewer symptoms associated with depression and anxiety.

And of course, all of this is easier read, than done. It all makes complete sense, but anyone who has tried to change (or break) a habit, knows that a big sweeping change is much easier than those small ones. That we can actually work to rewire our brains to provide positive feedback rather than being stuck in a negative feedback-loop is nothing short of miraculous mercy and generous grace.

I realize that this sounds very new-agey but I actually found comfort in the Scripture that reads, “Do not conform to the pattern of this world but be transformed by the renewing of your mind” (Romans 12:2). Renewing our minds — renewing our harried loop of anxious thoughts and worries — sounds to me a lot like mindfulness, a practice that much life prayer and meditation can help calm down the frantic thoughts and anxieties that we experience over the course of a day. To some people this looks like yoga, a dedicated time of meditation or prayer. The times when I am the most self-aware of the spiraling of negative thoughts are the times when I can calmly recognize them and prayerfully turn them over to God. When I refuse to self-reflect, I am caught in that downward destructive spiral and there is a lot more work to do to get out it.

Practically, the Ignatian practice of the daily examen has helped with this quite a bit. I don’t journal as often as I’d like to, but the examen is a rather simple exercise of spiritual self-reflection and the particular journal I use, The Examen Journal, stems from this tradition and uses the same four daily prompts. This enables me to move into a pattern of reflection, to process where I felt the most alive during that day and what I struggled the most with. And in the end, the ability to turn it over to God versus trying to work it out in my own strength (which sometimes is successful in the short-term but never in the long run). I often muse over John 1:16, "from His fullness we have all received grace upon grace." And it’s in this fullness of this grace that I can extend it to myself, and then to others. And that is quite the milestone revelation indeed.

Natalie d'Aubermont Thompson lives in Dexter, Michigan with her husband David and their three young children (two boys and a girl). She's an avid reader and coffee aficionado — you can often find her chasing after her kids with a book in one hand and a cup of coffee in the other. She moonlights as CEO of Saltar Consulting and writes about life and all things literary at Living by the Page. Natalie is Argentine-American and has worked, studied, and volunteered in over 35 countries. She and her family attend Knox Presbyterian Church in Ann Arbor, Michigan.

Listen in on our podcast conversation with author and professor Amy Davis Abdallah as we discuss her research on the process of maturing into womanhood.

Reflections
By Rebecca Carhart
Wanting to Be Heard

How can a naturally quiet person use her voice well? Rebecca Carhart tells of learning to accept her nature and invite others to hear her contributions.