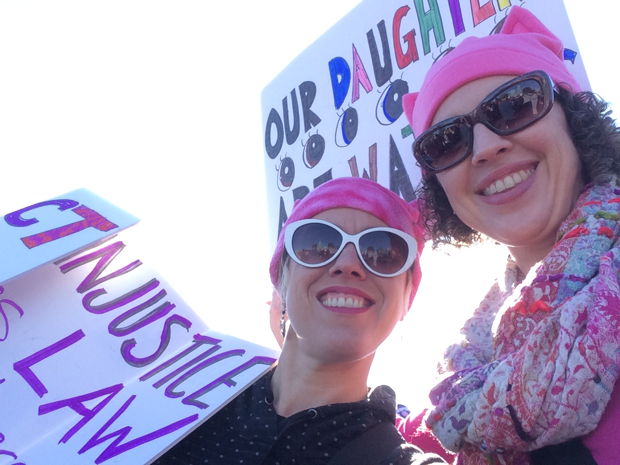 The first time I fought for women's rights I was in fourth grade. Long story short, there was a situation involving some coveted playground swings and a group of boys who wouldn't allow girls to use them. I took the matter firmly in hand and held court on that playground. And we ladies got our chance to swing on those swings.

The thrill of seeking justice was exhilarating. I made up my mind to become a lawyer and began my education at once by sitting down in our local library, copying out the Bill of Rights, and memorizing it.

I would have loved the idea that my forty-one-year-old self would march in the Women's March on Chicago in 2017.

Since those days on the playground, I've learned the landscape of feminism isn't as clearly marked as it seemed when the question was, "Are girls allowed to swing on the swings?" Growing up in the eighties and nineties, I was a beneficiary of the feminists who had gone ahead — which meant, actually, that I had to fight hardly at all. I never questioned the propriety of wearing trousers, or driving a car, or working after marriage. I was never undervalued or pinched, in the way one was in 1950s Mad Men offices. As a young twentysomething, I read Gloria Steinem and loved the way she went undercover as a Playboy Bunny, but my own brand of feminism included wearing long flowy skirts, lots of pink, and talking about girl power. Although I saw women in leadership all around me, my own professional goals were so modest that I never even caught a glimpse of a glass ceiling.

Growing in faith as a Christian brought new complexities as I waded through the widely varying opinions about what a godly woman looks like. To this day I keep my mouth shut about politics for some time whenever I find myself in a new group of Christian women. Because, you know — you never know. When my husband Jon and I decided to homeschool our two daughters, I learned that attending homeschooling support groups brought its own minefields. I wove my way through theologically complicated territory at those meetings, gleaning wisdom about education, parenting, and sacrificial faith from women with whom I often shared very little in terms of politics. I sometimes use my baking and knitting hobbies to help me fit in with certain crowds, while in other situations I play up the fact that I'm a working mother in an egalitarian marriage. It can be tricky to find "my people" sometimes.

But raising daughters has done something to me. Every day I consider what kind of model I am for them, what they are learning about womanhood, and how I can help my eight- and ten-year-old girls find God's path for them in the world. As they watch me cooking dinner and folding laundry in our house, I think they know these are tasks I have chosen freely and with joy, not merely out of social convention, and I hope they take it for granted when Jon does the dishes or cleans up after cats. They watch him treat me with respect, but we sometimes have to admit the sad truth that many men don’t treat women well (and women don’t always even know it), so we teach our girls to expect to be treated with full human dignity and to speak up loudly if that isn't happening. As we read accounts of Jesus and his interactions with women in Scripture, we explain the way women were usually treated in the Roman empire and the ancient Near East and how revolutionary Jesus was in the way he viewed women — and how much he loves our own daughters and their strong femininity. 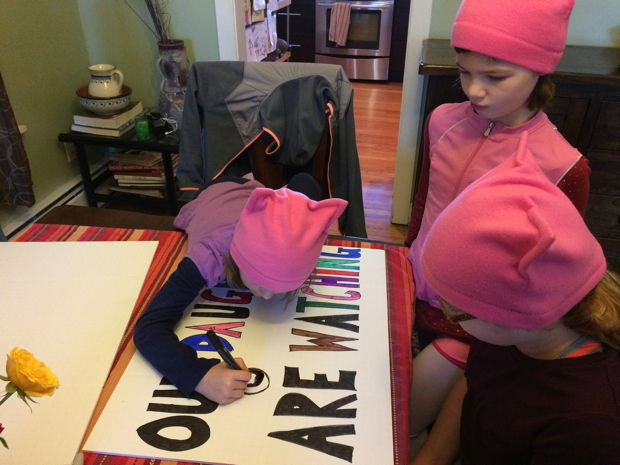 Despite all this, joining in the Women's March on Chicago still felt like a stretch for me, but I came to think it would be a worthwhile one. I had never been to a protest march before, and I didn’t know what to expect. I checked out the mission statement of the march beforehand, to make sure I could join with integrity. I woke up in the middle of the night worrying about Boston Marathon–style bombs, pondering what kinds of safety procedures might be in place among those thousands of women. I googled "how to make a protest sign" and learned that foam core is easier to manage than cardboard. I would have been much more comfortable staying home, stirring a pot of soup, and baking some cookies.

But lately I've been sensing God's invitation to show our daughters what it looks like to stand up and say, "It's not okay to treat women shamefully." We can take this value for granted in our happy home, but lately it appears to be at risk in the world around us. It needs to be said — out loud. And so I marched to demonstrate to our daughters what it looks like to speak out on behalf of women. I marched to show them an example of a Christian woman who expects a certain standard of behavior from her leaders. I marched to be part of a reminder to the world that women (and men) are to be treated with dignity. I marched to show that personal maturity, respect for others, and kindness are qualities worth celebrating.

My friend Linda and I decided to attend the march together. Our girls helped make signs while we all wore our "cat hats," then cheered us on from the backyard trampoline as the mamas headed out the gate. Linda and I made our way into glorious sunshine in the beautiful city of Chicago, shoulder-to-shoulder with a friendly, cheerful, upbeat crowd of women and men who, although very different from one another, all agreed that we should treat women well. As we marched, we chanted:

And I knew that my fourth-grade self would be proud. 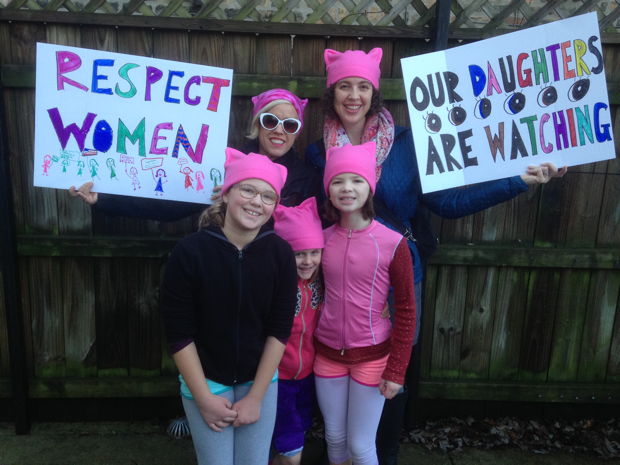 Reflections
By Laura Goetsch
Giving up Space and Gaining Community: The Benefits of Grad School Life

Laura Goetsch reflects on the powerful community life she experienced during the crucible of grad school.

What steps can we take to participate in bringing healing to our communities? Listen in on our interview with Grace Ji-Sun Kim, co-author of Healing Our Broken Humanity, as we discuss the spiritual disciplines that can lead us through pain into wholeness.

Finding the right church can be a struggle after experiencing close grad school fellowships.