The Blood of Jesus for a World in Need

We're grateful to Dr. Beth Falker Jones for sharing this excerpt from her recent book, Pandemic Prayers: Devotions and Prayers for a Crisis. 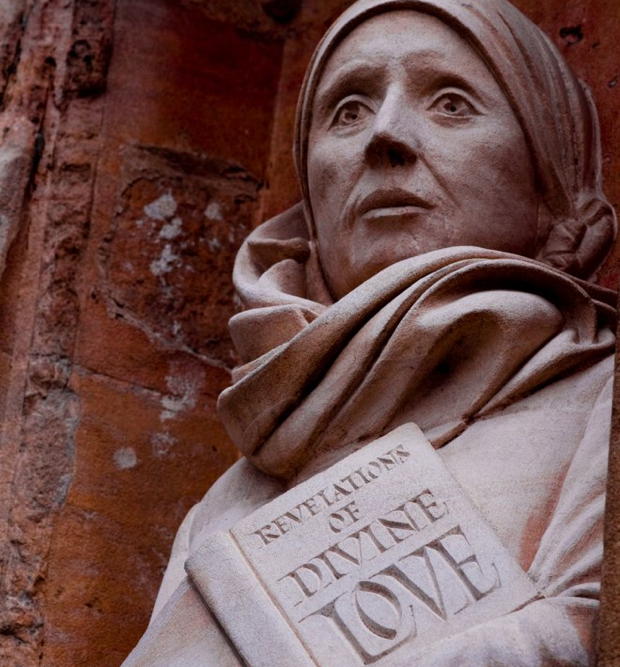 Yesterday, I wrote about the medieval Christian writer Julian of Norwich and her life of prayer in an anchor-hold. Today, I’m thinking more about what was going on in Julian’s world and the ways she might help us as we face this pandemic.
Julian’s world was crumbling.

Two times during Julian’s life, the plague swept through the English town of Norwich. The pandemic took a third of Europe’s population.
It was terrifying in its contagiousness and efficiency, and because people didn’t know how it was transmitted, fear and misguided attempts at self-protection were rampant.
There were too many bodies to bury.
Some people abandoned their sick loved ones.
Some doctors and priests refused to provide care.
The world was also in deep political and economic trouble. For Julian’s entire lifetime, England waged the Hundred Years’ War. Peasants rebelled against taxation and exploitation, and the social order of feudalism was falling apart.
Violence was a fact of life.
At the same time, authoritarian hierarchy and control was ramping up in the late medieval Roman Catholic Church, as the church clung to power in a changing world. This was a time of intense and carefully ordered social and churchly hierarchies.
People were terrified of dying of the plague without receiving last rites.
Rumblings of critique against the church — the kind of rumblings that would eventually become the Protestant Reformation — were afoot. Questions were asked about access to the Bible in English, about the authority of the church and of the pope, and about the role of the church in salvation.
And the church was cracking down on those rumblings by burning people as heretics.
There was intense anxiety about bodies. People knew contagion could be passed body to body, but it was not clear exactly how. Blood and guts and bodily fluids were threats to be contained.
Human bodies were feared as dangerous and polluting.
It seemed like the world was falling apart.*

And it seems like our world is falling apart.
We fear for our health and that of our loved ones.
We’re tempted to put our own safety and security before that of others.
We’re terrified of economic collapse.
Where we should be able to turn there for the gospel of grace, too many of us are hurt by sin in the church.
We may look for scapegoats and search for someone to blame for the pollution we fear (in the United States, acts of racism against Asians and immigrants come to mind).
We know fear. We know terror. We know sleepless nights.

Julian’s world was crumbling, too.
And yet.
She would turn us toward the cross of Christ.
She tells us to look steadily at Jesus. She reminds us that he is with us and for us. She asks to see the abundance of Christ’s blood spilled for us.
Here is her account of one of her visions of Jesus’s blood.

Great drops of blood fell down ... in the spreading out they were bright red....The abundance was like the drops of water that fall of the eaves of a house after a great shower of rain, which fall so thick that no man can number them.... Because of their roundness, the drops were like the scales of herring as they spread over the forehead....This showing was alive and active, and hideous and dreadful, and sweet and lovely. And of all the sights it was the most comfort to me that our God and Lord, who is so worthy of respect and so fearsome, is also so plain and gracious; and this filled me with delight and security of soul.**

She wants us to see that Jesus is real. That his blood and body are real. That he is here for us.
This is only one of many descriptions she gives of the blood of Jesus. Copious. Abundant. Flowing.

Julian is not ignoring the turmoil of the world. She’s telling us where to look so that we can live in that world.
Where the plague destroys, the blood of Jesus flows.
Where some put their own safety over those who need them, Jesus draws near.
Where violence threatens, Jesus is our refuge.
Where human leaders would impose hierarchy, Julian saw the blood of Jesus flowing for all, making no distinctions between priest and sinner, rich and poor, healthy or sick.
Where the church creates false obstacles between us and God, Julian saw that the blood of Jesus clears those barriers away.
And where people were scared of bodies and blood, Julian offered the grace of God.
Jesus’s body, Jesus’s blood, covers and heals.
The blood of Jesus is his intimacy with us. It’s been poured out for us. It’s flowing freely in a world that seems to be crumbling. He is with us. He is for us.

“For truly,” says Julian, “it is the most joy that can be, as I see it, that He who is highest and mightiest, noblest and worthiest, is also lowliest and meekest, most friendly and most gracious.”
I’m praying today, with Mother Julian, to turn my eyes to the cross.

Holy God,
When it seems our world is crumbling, remind us that your goodness is sure. Where we ache, help us turn to you for solace. Be with all who are terrified. And remind us of Jesus and his care for us. Remind us that his blood is free for all.
In the name of the Father, the Son, and the Holy Spirit,
Amen.

* Much of this reflection was informed and inspired by this wonderful book: Julian of Norwich and the Mystical Body Politic of Christ by Frederick Christian Bauerschmidt.
** Revelations of Divine Love by Julian of Norwich (page 7)

Used by permission of Wipf and Stock Publishers, wipfandstock.com. 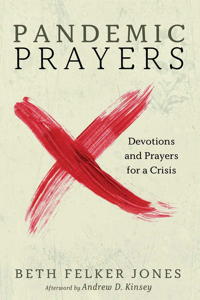 Pandemic Prayers: Devotions and Prayers for a Crisis by Beth Falker Jones

Tags:
notes from the pandemic

Dr. Beth Felker Jones, who earned her doctorate at Duke University, teaches systematic theology at Wheaton College. She is a regular contributor to The Christian Century and is currently working on a theology of conversion titled Converting Love: Conversion Among the Loci for Oxford University Press. Dr. Jones’s most recent book is Faithful: A Theology of Sex. She is also the author of Practicing Christian Doctrine: An Introduction to Thinking and Living Theologically, God the Spirit: Introducing Pneumatology in Wesleyan and Ecumenical Perspective, and The Marks of His Wounds: Resurrection Doctrine and Gender Politics.

How does one celebrate Valentine's Day in a pandemic? Christine Wagoner explores the complex emotions surrounding this holiday — particularly in coronatide.

Reflections
By Ann Dominguez
When One Part of the Body Hurts, We All Hurt

How are medical professionals feeling about vaccination rates? Read one doctor's heartfelt plea for community protection.

English professor Heather Walker Peterson grieves yet another challenging Lent and offers solace as we seek conversation with Christ in this season.

Listen in on our conversation with writer and poet Grace P. Cho where we discuss her endurance through the many challenges of this past year, Grace’s personal experience with Covid-19, and the recently published book of devotionals she co-edited.