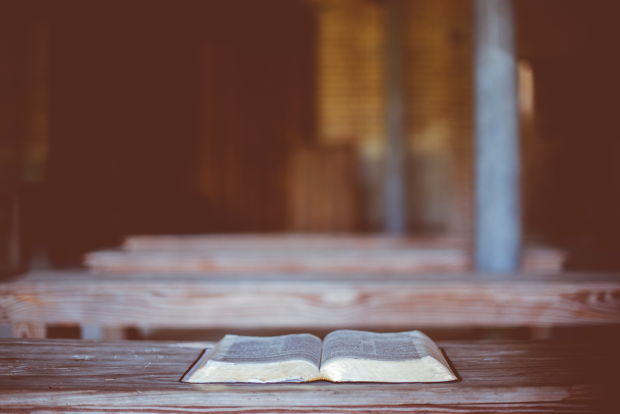 Last summer a group of grad students from our campus fellowship went to hear the San Francisco Symphony play the Star Trek soundtrack live at a screening of the reboot movie. It was phenomenal! A year later we’re still talking about it. And we still sound the same. We gasp and say “Wow! It was awesome!” We splutter superlatives to describe the music and the experience of the live orchestra — but somehow it’s all inadequate. And then we drop our arms and say, “Aww, you should’ve been there!”

How do we share what we have seen, heard, and experienced with those who weren’t there? What do we do when an explanation just isn’t enough? And what of those experiences that we can’t explain because we don’t quite understand what happened, but we know what we saw and we know that life is different now because these things happened?

Much of Scripture involves humans trying to find the words and means to bear witness to what they have seen, heard, and experienced of the living God.

In “The Word of God in Its Threefold Form,” Karl Barth talks about the Bible as the written “witness” to the coming of Christ. A witness testifies to what she has seen and heard, which is different, according to Barth, from someone explaining what she has seen and heard. For Barth, God’s revelation to us is the utterly inexplicable event of divine reason communicating with human reason. Who can explain it? This should be impossible! But we can proclaim it!

In a court of law, a witness testifies and risks imprisonment for perjury if her words are false. More confronting for us, the word translated “witness” is martus in the Greek, which in the first century took on the meaning of “martyr,” as Christian witnesses were persecuted for their testimonies.

Through the many different texts of Scripture, we can say that the one thing in common in all of them is that the authors and editors are somehow trying to talk about their experiences of God in their midst. They are trying to bear witness to a reality that is, in so many ways, utterly inexplicable. How does Israel explain why God suddenly grabs the attention of Noah, Abraham, and Moses? How can the people explain that it is their own God who sends them into exile and yet is somehow present and weeping with them by the rivers of Babylon? And as we move into the New Testament, how do we explain God who comes in the form of a man, and dies, and then rises from the dead?

To experience the resurrected Jesus in our midst radically changes the status quo and is not safe at all, as the early church discovered. But what they saw meant that life would never be the same again. It was “Wow!”, “Awesome!”, and ultimately, “You really should experience this!”

As the Apostle John wrote, “We declare to you what we have seen and heard so that you also may have fellowship with us”(1 John 1:3). And what they saw was worth dying for, even if they couldn’t fully explain it.

The writers of Scripture were not looking for safety. What they found in God was unsettling, life-changing, puzzling, hard to comprehend. But they couldn’t walk away from it. We see in the witness of Scripture the authority of writers gripped by truth that they could not put down, regardless of the cost to themselves.

And they share it with us in open-handed honesty. When we read the ups and downs in Scripture, the stories that are puzzling, the parts that make us angry, surprised, or shocked, we are reading accounts of people who are saying, “We can’t explain it, but this is what we have seen and heard and experienced of God, and we cannot be silent.”

Even Paul, in the midst of all of his powerful reasoning and argumentation, finally burst out, “Oh, the depth of the riches of the wisdom and knowledge of God! How unsearchable his judgments, and his paths beyond tracing out!”(Romans 11:33).

Wendy serves on staff with the Stanford InterVarsity Graduate & Faculty Ministries. She comes from an international background having been born in Malaysia and grown up in Australia. After practicing law in Melbourne for ten years, she moved to Oxford in the UK where she studied apologetics and theology. She is married to Jared whom she met in the grad fellowship at Oxford and they now live in Palo Alto, California. In her spare time she rides horses, cooks delicious meals with Jared, and watches Star Trek episodes on Netflix.

Carmen Acevedo Butcher takes us on a journey of self-examination, drawing a path through our imperfections from identification to acceptance to thanksgiving.

No matter what your political leanings, it’s a complicated time in the United States. There’s no debating the fact that roughly half (or more) of the country will be sorely disappointed when they awake on the morning of November 9...

Jasmine Obeyesekere Fernando describes her practice of meeting God in her inner world through daily meditations on Scripture.