St. Patrick and the Presence of God

We're so pleased to share with you this reflection based in the Via Divina: The Celtic Way for Lent that InterVarsity's Faculty ministry is hosting. Find more information about the Celtic Way below. 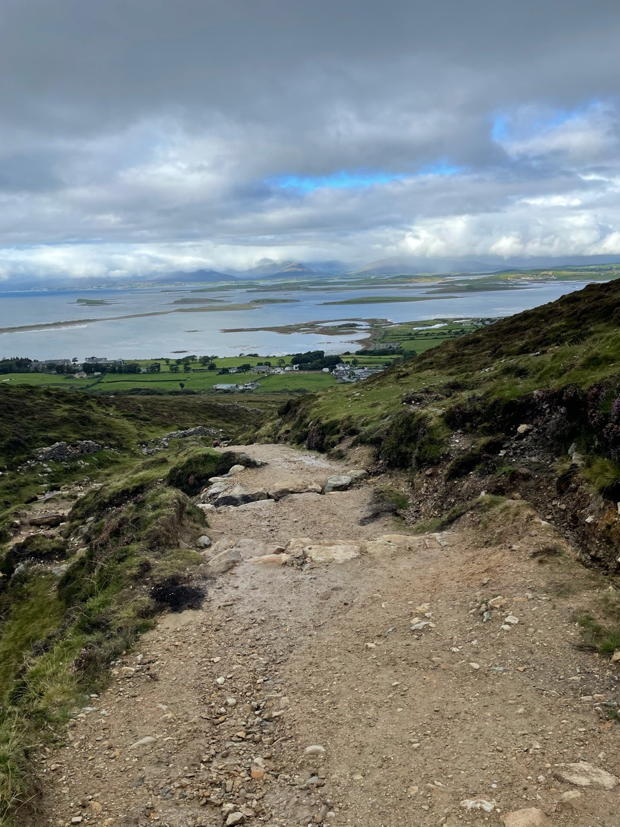 In considering the gift of God’s presence, everywhere and always, during our Lenten journey we might reflect on our own failure to be attentive to God, even as he is right beside us. We are often asleep to this. We are frequently distracted by the way we fill our lives with too much. During Lent we are invited to repent of these things, in sorrow, and to open ourselves to the gift being given — the faithful presence of God. ~ Carrie Bare

The Lord your God is with you,
the Mighty Warrior who saves.
He will take great delight in you;
in his love he will no longer rebuke you,
but will rejoice over you with singing.

Early in his ministry, the stories say that Patrick set out to summit this mountain that is now named after him, Croagh Patrick. In his time, it was known as Cruach Aigle, and was already considered a sacred mountain — a “thin place” where the connection between heaven and earth felt tangible. Patrick would have made the trek up the mountain ridge, feeling the mud and rocky terrain under his feet with each step. Maybe, as he climbed up, he heard the distant sounds of people working in the valley below. Or perhaps a stray mountain sheep joined him at times. As he gained elevation, he may have slowed down to catch his breath, to carefully find his footing among the loose rock fragments that cover the final steep climb to the summit. At last, at the top of the mountain, Patrick stayed for 40 days and 40 nights, fasting and praying.

During his weeks-long fast, Patrick likely experienced the intense clashing of Irish weather conditions. On a clear, sunny day, the view from the peak of Croagh Patrick is breathtaking. You can see the crystal blue water of Clew Bay sparkling miles away, carved out by the patient movement of glaciers. Between the mountain edge and the water you can see acres and acres of lush green pastures. But many days, the summit is fierce, covered in clouds and fog with no protection from the wind or rain.

We can only wonder what Patrick thought about while he was alone on that mountain. Maybe he reflected on his life’s journey and all he’d been through that had brought him to this place: His captivity and enslavement, how he encountered God in a new way on another  mountain — Slemish — maybe he remembered his escape and return home to freedom, and his unexpected calling to return to the land and people of Ireland. Maybe he remembered God’s protection as he lit the Paschal fire on another high place, the Hill of Slane. Perhaps he remembered the people who’d responded to his message, whom he’d baptized in the name of the Trinity. And perhaps he also thought of everything that lay ahead of him as he followed God, the places that he did not yet know, the paths that he had not yet taken, the people whom he had not yet met.

There is a popular legend that says that, during those 40 days of fasting and prayer, Patrick cast out the snakes from the island forever. Although we now know that this is only a tale — because scientists tell us there never were snakes in Ireland — the legend symbolizes one of the reasons Patrick was on this mountaintop: He was engaging in 40 days of spiritual battle. He was seeking God’s good for the land and its people. He was praying against everything that would bring harm — any evil, any idolatry, any corruption, any false prophets. He came to this mountaintop seeking God’s strength, seeking God’s vision of good for the land; seeking God’s direction. But above all, he was seeking God’s presence.

— from Via Divina: The Celtic Way — Walk 3 and Carrie Bare

If you are interested walking in the steps of Patrick and other Celtic saints through audio-guided walks you can still register to take part in The Celtic Way for Lent.
Journey Ireland for Faculty and Friends: June 4 - June 12, 2022
Join in an in-person pilgrimage around Ireland following in the steps of Celtic saints as we take time out of the ordinary to walk together with Jesus. There are still five spaces open and the cost is $1600 per person (excluding airfare) with a discount for InterVarsity staff. Click through to register.

Soon after publishing my translation of that medieval book on prayer, The Cloud of Unknowing, I crash-landed in a counselor’s office. I had become a jittery, work-driven insomniac whose old ways of coping had failed. I was living fifteen-hour writing days . . .

Blog
By Ann Boyd
Rejoicing in the Fullness of Easter

When I was 26 years old, I began to grasp the profound significance of Easter. Despite being surrounded by liturgy in my Catholic childhood days, despite the growth of my gratitude for the cross...

Spiritual Formation
By Tish Harrison Warren
At a Loss for Words: Finding Prayer Through Liturgy, Silence, and Embodiment

At an unaccustomed loss for words, Tish Harrison Warren discovers prayer in liturgy, silence, and embodiment.