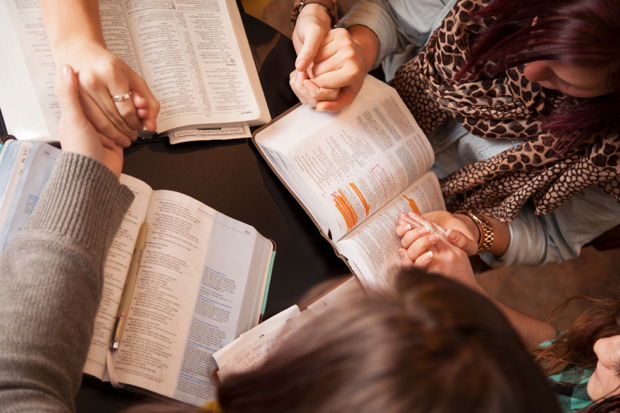 Beyond that, we've recognized that, in reality, many of us spend more time saying “I’ll pray for you” or thinking “I should pray” than we do actually praying.

And so, during this past spring quarter, we set out to be a little more intentional about our prayer lives.

We decided to meet weekly to study different types of prayer found in Scripture, including prayers of supplication, praise, lament, confession, etc. And following our studies, we've prayed. And, no surprise here, a lot of us have reported praying a lot more even outside of our gatherings. For one another. For the university. And for the world in which we live.

The timing of each of these weekly prayer groups with its specific topic has been more providential than we could have expected. For example, the week when there were riots in Baltimore and an earthquake in Nepal, we were scheduled to lament. We wondered: What do we do as a Christian student group here thinking about Christians (and everyone else) facing deep struggles out there? Starting with lament seemed about right. In small groups we did the important work of going to God, declaring what a mess things sometimes are, and boldly asking him to intervene.

And because prayer is so often character shaping, we realized that there was more that we could do.

And so, for the first time, as a community, we banded together to give in a way we haven’t before. Through a student connection to Nepal, we raised money to build semi-permanent shelters so that those displaced by the earthquakes would have more than tarps to live under during the upcoming monsoon season. It wasn’t a lot (about $300), but it was enough to build shelters for 32 people.

Beyond that, as our very diverse student group has focused in on prayer, we’ve realized that praying about race isn’t enough.  With White, Asian, Black and Latino students coming together weekly, the tensions felt in the world out there are some of the same tensions felt in our own hearts.  As we've prayed together we’ve been confronted by the reality that we have friends in our own community who daily experience subtle and not so subtle racism and so we’ve been driven to confession and to having more open and honest conversations about what we can do to be a community marked by reconciliation and true Christian unity.

For us, “I’ll pray for you” has come to be more than just words. It's become a call to intentionality and action. It’s moved us closer together and further into the Kingdom where just aren’t enough.

My bottom was already numb, and my skinny shoulder blades ached against the hard wooden pew where weekly as a child I sat obediently a few rows back on the left-hand side of the church with my family. Mostly I spent a lot of time staring at the stack of big black hymn numbers . . .