Many Beautiful Things: An Interview with Filmmaker Laura Waters Hinson 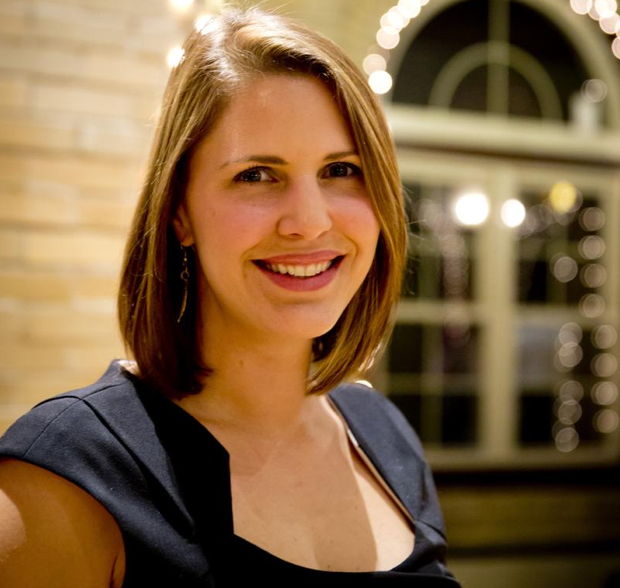 Laura Waters Hinson is an award-winning documentary filmmaker and mother of two from Washington, DC. Her work spans a variety of subjects, from street vendors in Washington, DC to female entrepreneurship in Rwanda. Her documentary, As We Forgive, won the 2008 Student Academy Award for best documentary. Her latest film, Many Beautiful Things, releases on March 8.

Many Beautiful Things explores the life of Lilias Trotter, an artist in Victorian England, who may have been lost to history except that a devoted woman, Miriam Rockness, worked to research, learn, and tell others about Lilias’s story. In this aesthetically gorgeous film, Hinson explores what Rockness has uncovered about Trotter’s life as an artist, crisis of vocation, and eventual move to North Africa to work as a missionary amidst health struggles, harsh conditions, and political instability.

I caught up with Laura to talk about Many Beautiful Things, the legacy of Lilias Trotter, and working with Downton Abbey star, Michelle Dockery, who is the voice of Lilias Trotter in the film. —Tish Harrison Warren

Okay, so Lilias Trotter. What drew you to make a project about her?
I'd never heard of Lilias Trotter in my life. A couple of years ago, I got an email from a woman named Miriam Rockness, the world's expert on Lilias Trotter and biographer of Lilias. She was the head of a board overseeing the making of a film about the life of Lilias, and she asked if I would be interested in making it. At the time, I had just had Maddox (my son), who was around nine months old. I was about to forward her email to another filmmaker to say, "Hey, I can't take this on, but maybe you'd be interested." But I had just read Lean In. It was funny. All of a sudden I felt I had Sheryl Sandberg’s voice in my mind. And I thought, “You know, consider it.” So I cancelled that email.
I felt like that was a really pivotal moment in my life. I said, let's have a conversation with Miriam. And that ended up being a two-hour phone call where she told me all about the life of Lilias Trotter. I was so taken both with Lilias's humility and the angst that I imagine she felt over knowing that she had this decision to make between the fame and the fortune that would come with being a great artist in England or giving herself over to this deeper passion and this deeper calling that she had to be a missionary. She really embraced a life of obscurity. All the themes are so interesting for me.
One of the most interesting parts of the film is the relationship between Trotter and [Victorian thinker and art critic] John Ruskin, who says that he believed that women couldn't paint and then he meets Lilias and says, "I was wrong." I’m interested in what kind of world Lilias Trotter inhabited in terms of gender expectations.
There were very few women painters of any significance. It wasn't that women weren't painting. They would paint in their drawing room for fun. But there weren't very many women who were taken seriously as professional artists. For her to have been discovered by Ruskin was a big deal. It would have been a huge opportunity for her. And I think the decision that she made to go to the mission field was also very unusual. At the time there was a growing movement of Evangelical Protestants who were going out and doing mission work. But single, female missionaries? That was pretty limited. 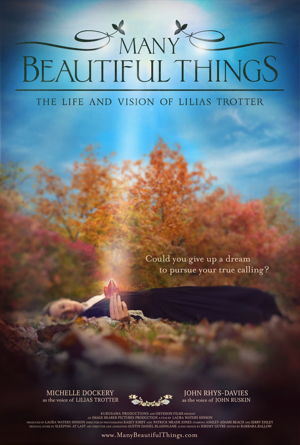 There’s a crisis in the film between Lilias’s career in art, on one hand, and pursuing missions or working with the poor, on the other. I think many women struggle with feeling like we have multiple vocations that we are called to and feeling pulled between loves, so there's so much for women to draw from the movie. But Lilias gives up a career in art for ministry overseas. So I was curious how you, as an artist, think about Lilias Trotter's crisis in the film and the choices she made?
At first, when I encountered the story, I thought, “Well, this is like my own nightmare scenario, you know?” When I was in college, I had this fear, "Oh, God's going to make me leave behind everything I love.” [Laughs] I feel like that was my immature perspective on how calling works. Then as I really pondered her writing, I think I've become pretty convinced that for Lilias, she loved painting, but I think it wasn't ultimate to her. It wasn't of ultimate significance to her. It was really something she was talented at and loved on a certain level. But unless her art served something that had an ultimate, consequential type of nature to it, I think it just was not compelling to her by itself. However, I think that was such a very personal decision that she made that was unique to her, and I don't think a prescription for other artists.
She longed for adventure. She longed to do things that were not part of the normal social expectations. She did not want to get married. She did not want to have children...I mean, she didn't ever write about that in her journal. She never seemed like she missed any of that. So my conclusion is that she did what actually was most fun and interesting to her. She went on an adventure with her friends...and she stayed until she died. So I would look at her and say that she made radical sacrifices for the thing that she felt she was most gifted to do. I think that ultimate significance can be found in creating a work of art. It just didn't seem to be that for her. So hers was a very, very personal decision.
And she intentionally embraced a life of obscurity.
But I don't think the take-away from her life is that our work should be obscure and have no impact. [Laughs] I think what matters is a posture toward it, and if success and impact comes, then you stay humble. And if success and impact never come, then we still rely on the joy that we have in the Lord. Sort of, "I will be grateful, no matter the outcome."
If there's one take-away or thing that people could learn from Lilias Trotter, what would that be?
Well, my goodness. That's a hard one. I keep going back to the idea that for Lilias, the way that she judged herself and her success was based on a really different set of standards than what the world judges us by. She found great peace and strength in submitting herself to these kinds of transcendent values and standards, because it released her from having to have any kind of worldly success.
I think that is something all of us really need to embrace. I think all of us, almost all of us, judge ourselves so harshly. And we fear. There's too much fear in our lives. Are we doing it right? Are we succeeding? Are we going to make an impact? Do we matter? I think Lilias lived in a place of peace and rest in the midst of all those questions, in really one of the harshest conditions you can find  the desert of North Africa.
For me, she helped reorient my own sense of how I define my success and my value. Michelle Dockery, who did the voiceover for Lilias, told me that she was so moved by the humility of Lilias — she was not concerned with earthly success, but she was concerned with other people. Michelle was so drawn by that. 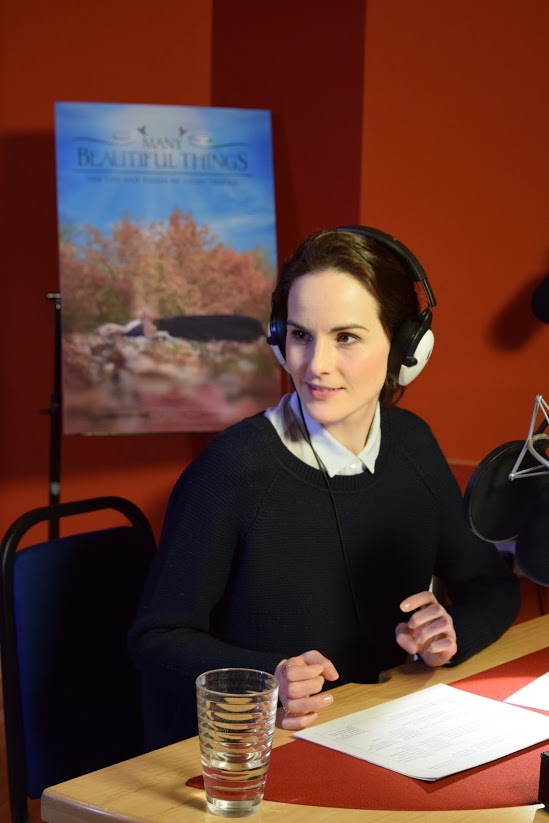 Since you brought up Michelle, I'm a big Downton Abbey fan, so how was it to work with Michelle Dockery — or for Downton fans, Lady Mary?
It was totally surreal!
We were looking for the right voice for Lilias, a resonant, authoritative and yet lovely voice. We had to get strength and loveliness together. And Michelle Dockery is the first person I thought of. Her voice is such a unique British voice. When we pitched it to her agent, we got a response really quickly that she wanted to do it. And that made me want to work with her. It was a dream for me because I love Downton Abbey. And she’s one of my favorite characters. It was so funny when she arrived at the studio when we recorded in London. And they said, "Yeah, just go on up! She's in her dressing room. You can just go on in." And I was like, "I cannot just open the door on Lady Mary while she's having her makeup done!" [Laughs]
We spent about five hours with her, and she was great. And we laughed. I really enjoyed working with her. She's so talented. 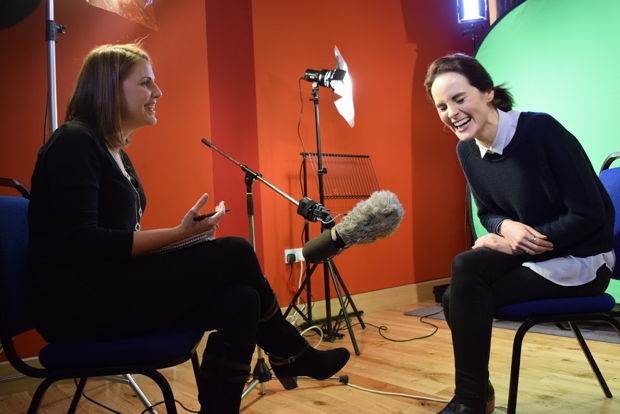 Laura, thank you so much for talking with us! Congratulations on a beautiful film! I really enjoyed it!
Many Beautiful Things is available as a DVD or digital download (to rent or buy) on March 8 — International Women’s Day. You can find it on iTunes, Amazon, or at manybeautifulthings.com.